SEOUL, June 21 (Yonhap) -- An Air Force noncommissioned officer was indicted on charges of sexually harassing a female colleague, which led her to take her own life, the defense ministry said Monday.

The master sergeant, surnamed Jang, is suspected of sexually abusing the victim of the same rank inside a car on their way back to their base after a drinking session in March. Around three months later, she was found dead in an apparent suicide after complaining of the Air Force's mishandling of the case.

Amid intense public fury, the case was referred to the defense ministry, and Jang was detained earlier this month.

"The defense ministry prosecution indicted Jang on charges of sexual harassment and inflicting injury, as well as violating the Additional Punishment Law on Specific Crimes," the ministry said in a release. The alleged violation of the additional punishment law was applied as the suspect threatened the victim with retaliation if she did not forgive him.

The ministry also said the military prosecutors raided the public affairs office of the Air Force headquarters as part of an extensive probe without specifying details.

The military came under criticism following revelations that the victim's superiors, according to her family members, tried to persuade her to reach a settlement with the suspect without taking due protective measures in a suspected attempt to cover up the case.

So far, three Air Force noncommissioned officers, including Jang, were detained, and dozens have come under probe. 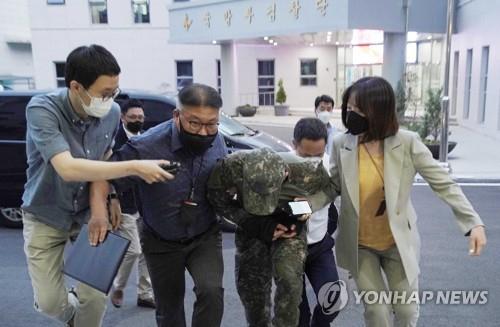