(ATTN: UPDATES throughout with remarks)
By Koh Byung-joon

SEOUL, June 22 (Yonhap) -- Unification Minister Lee In-young on Tuesday called for "active" and "agile" cooperation between South Korea and the United States to bring North Korea back to the negotiating table as he met with the new U.S. special envoy for Pyongyang.

Ambassador Sung Kim, the U.S. special representative, responded that the two countries "are very closely aligned on all important aspects" of their North Korea policy and expressed support for "meaningful inter-Korean dialogue, cooperation and engagement" with Pyongyang.

"We determine that now is a very critical watershed moment at which we can move into a mode of dialogue," Lee told Kim at the start of the meeting held in his office. "I think it is the time for South Korea and the U.S. to move in an active and agile manner through consensus."

Lee asked for close discussions between South Korea and the U.S. on Seoul's push for inter-Korean cooperation in various areas, such as humanitarian aid, reunions of war-separated families and anti-pandemic efforts.

Kim echoed Lee's views, saying that the allies have been "closely in touch" since the inauguration of the Joe Biden administration on North Korea and expressed support for Seoul's efforts to kick-start stalled inter-Korean relations through cross-border exchanges.

"I believe our two governments are very closely aligned on all important aspects of our North Korea policy. ... Most importantly, I think our two countries agreed on the shared commitment to pursue complete denuclearization of the Korean Peninsula through diplomacy and dialogue," he said.

"We support meaningful inter-Korean dialogue, cooperation and engagement, and I look forward to staying in very close touch with you and your colleagues about some of the ideas that you have going forward," he added. 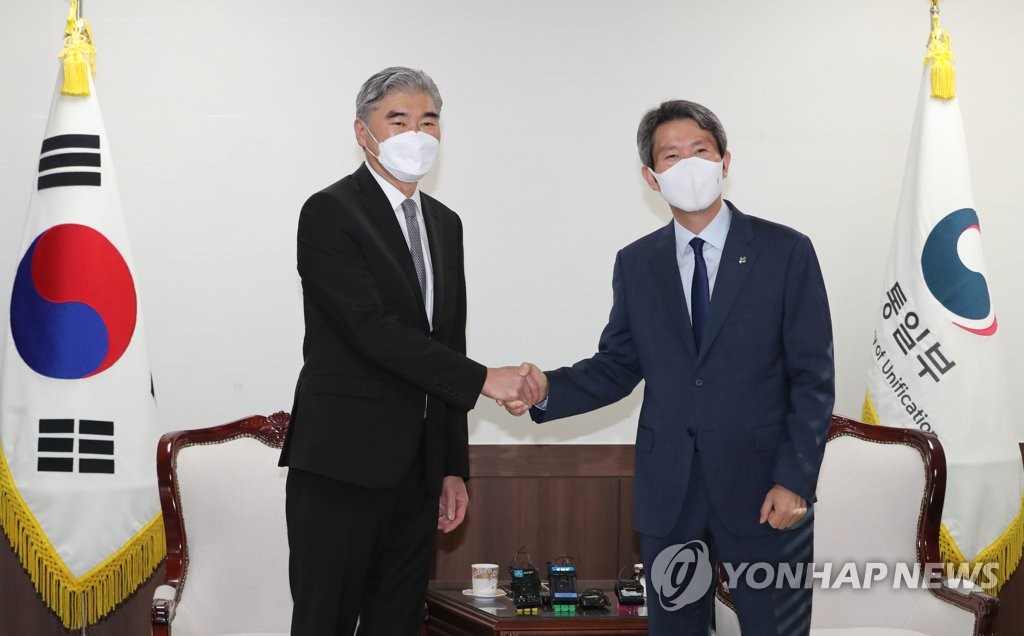 The meeting was immediately followed by a "high-level bilateral consultation" between the U.S. envoy and Vice Unification Minister Choi Young-jun. The two sides are also scheduled to hold working-level talks Wednesday.

Those meetings caught special attention as the foreign ministry earlier announced that South Korea and the U.S. have agreed to consider ending a "working group" forum on North Korea policy in a conciliatory gesture to Pyongyang that has been sharply critical of the forum.

The working group was set up in November 2018 to coordinate the approaches on denuclearization, humanitarian aid, sanctions enforcement and inter-Korean relations. The North has demanded its dismantlement, arguing it has hampered cross-border exchanges and cooperation by focusing too much on enforcing sanctions.

The high-level consultation between the State Department and the unification ministry spurred speculation that it could replace the working group forum in a way that focuses more on inter-Korean cooperation than sanctions implementation.

Though he did not mention the working group, Kim said that he is confident that the two countries will continue to have very tight coordination going forward through relevant government agencies, including the unification ministry.

The U.S. nuclear envoy arrived in Seoul over the weekend for a five-day trip. In a trilateral meeting with his South Korean and Japanese counterparts Monday, he said the U.S. looks forward to a positive response from North Korea for its dialogue overture.

His visit here came days after North Korean leader Kim Jong-un urged his country to be ready for both dialogue and confrontation with the U.S. at a key party meeting last week, raising cautious optimism that Pyongyang might be preparing to come out for denuclearization talks.

South Korea has sought exchanges in humanitarian and other non-sensitive areas with the North to kick-start inter-Korean relations that have stalled amid lack of progress in denuclearization talks between Pyongyang and Washington.