Sung Jung was picked as a preliminary preferred bidder for Eastar and given the preferred rights to buy the carrier. It had offered 100 billion won (US$88 million) for the Eastar takeover.

Sung Jung, the stalking horse bidder, notified the court that it will pay the higher price to become the new owner of the carrier, and the court accepted it, the chairman said. 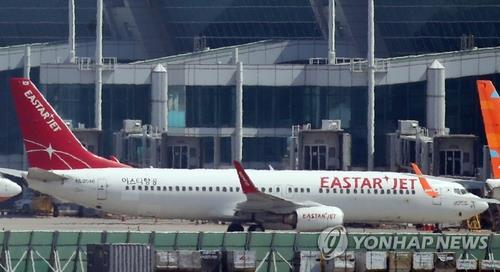 The court selected the Ssangbangwool consortium as secondary bidder for the low-cost carrier.

Unlike the Ssangbangwool consortium, which needs to team up with financial investors to acquire Eastar, Sung Jung said it is able to fund the deal with its own cash.

In the stalking horse bid, Eastar picked Sung Jung as the preliminary preferred bidder ahead of an auction, in which other bidders submit their prices.

In the follow-up steps, Sung Jung is expected to conduct due diligence on Eastar for a couple of weeks and sign a deal to buy the low-cost carrier in July.

Eastar is required to submit its debt-repayment and other rehabilitation plans to the court by July 20, which was delayed by two months.

The carrier has said it aims to receive an air operator certificate (AOC) from the transport ministry once the Seoul bankruptcy court accepts its rehabilitation program to resume domestic flights within this year.

It has had difficulties in finding a strategic investor since July last year, when Jeju Air Co. scrapped its plan to acquire the carrier amid the prolonged COVID-19 pandemic.

In January, Eastar Jet applied for court receivership to find a way to continue its air transport business through M&A procedures.

The court approved the corporate rehabilitation process for the carrier in the following month.

The court later ordered preservation measures and comprehensive prohibition to prevent creditors from seizing or selling company assets and to freeze all bonds before the carrier's rehabilitation proceedings.