SEOUL, June 23 (Yonhap) -- Despite a flurry of conciliatory gestures by South Korea and the United States, uncertainty lingers over the prospects for an early resumption of dialogue with North Korea, with the recalcitrant regime discontent about overtures short of concrete incentives, analysts said Wednesday.

"North Korea's stance at this point might be that they would have already come forward for dialogue had they been moved by such mediocre conciliatory gestures," Kim Yong-hyun, a professor of North Korean studies at Dongguk University, said.

"The North may want a concrete package of incentives and seek to raise the stakes and get the upper hand when negotiations are set up -- rather than being dragged on or swayed by the United States in the process," Kim added.

During his visit to Seoul this week, Sung Kim, the new top U.S. nuclear envoy, reiterated Washington's offer to meet with the North "anytime, anywhere without preconditions" and agreed to consider what Seoul officials termed the conclusion of the "working group" forum, which Pyongyang has decried as an obstacle to inter-Korean relations. 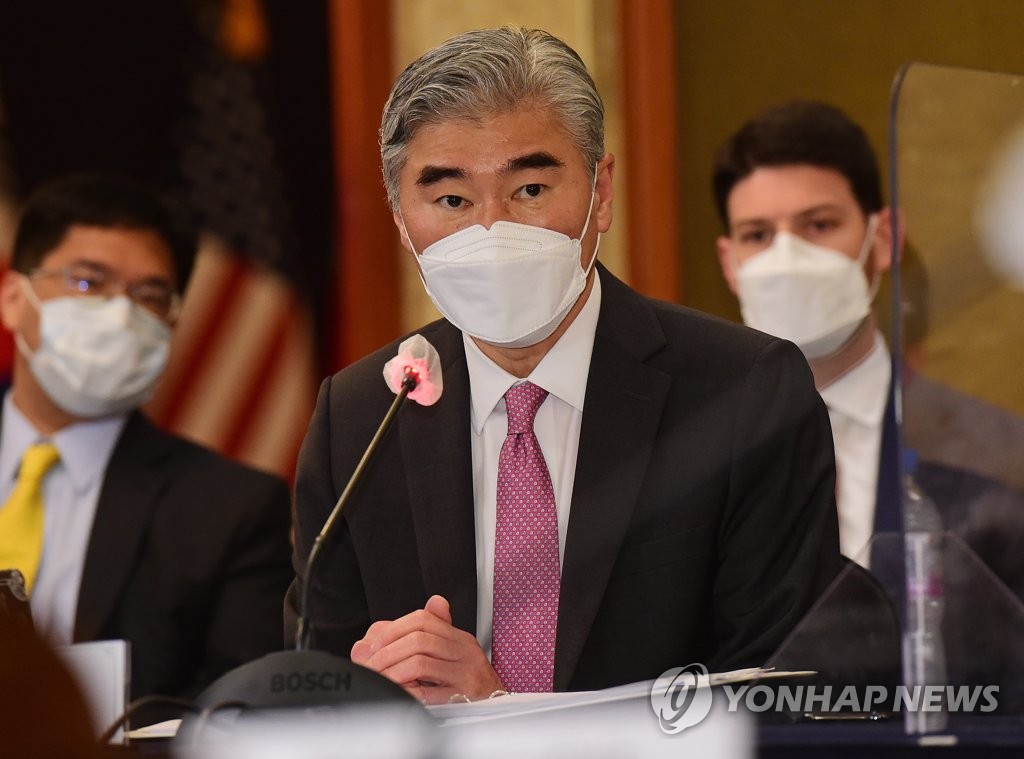 The moves followed President Moon Jae-in's offer last week to cooperate with the North on COVID-19 vaccine supplies and Unification Minister Lee In-young's repeated emphasis on the need for food aid to the impoverished country.

But Pyongyang has yet to signal its readiness for reengagement, though leader Kim said last week that his country should be prepared for both "dialogue and confrontation" -- an order construed as a sign of openness to dialogue as well as an implicit call for Washington to do more for its return to the negotiating table.

In April, the administration of U.S. President Joe Biden completed its monthslong review of policy on the North and said it would pursue a "calibrated, practical" approach toward the goal of the complete denuclearization of the Korean Peninsula.

Amid Pyongyang's persistent wariness over policy swings with a change of government in Washington, the Biden administration also stressed it would build on past accords, including the 2018 Singapore summit agreement reached between then U.S. President Donald Trump and Kim.

Yet, the still sketchy, broad-based policy principle does not seem to be convincing enough to bring the North back to dialogue, particularly when Pyongyang is preoccupied with multiple domestic challenges ranging from the COVID-19 pandemic to a deepening food shortage, which the North Korean leader has publicly acknowledged recently.

The North's reservations on the U.S.' overtures could also stem from suspicion that Washington appears to be making a series of dialogue offers to build its own case that the North is to blame for the nuclear standoff.

"Given Kim Yo-jong's negative stance on the resumption of dialogue, my assessment is that Pyongyang is not ready yet to engage in dialogue with Washington anytime soon," Cheong Seong-chang, director of the Center for North Korean Studies at the Sejong Institute, said.

"As Kim Jong-un said his country should be ready for both dialogue and confrontation, the North is expected to start preparations just now. But the resumption of dialogue itself may be difficult due to distrust and a deep-rooted sense of antagonism between the North and the U.S.," he added.

But an aperture for engagement could emerge as the worsening North Korean economy crippled by sanctions and a pandemic-driven drop in trade, as well as its pressing need to secure COVID-19 vaccines, could force Pyongyang to look out for outside help, some observers said.

"As the delta variant of the coronavirus is taking hold across the globe and could spread to the North, Pyongyang could find no other choice but to seek outside help," Nam Chang-hee, a professor of international politics at Inha University, said, referring to the super-contagious virus variant first identified in India.

"But such aid may need to be couched in a face-saving way, given that the South's support to the North could highlight the economic gap between the two Koreas and could pose a threat to the legitimacy of the North Korean leadership," he added.

With the U.S.-North Korea engagement in limbo, Pyongyang could turn to Beijing amid concerns that cooperation between the major powers on the North Korean nuclear issue could be marred by an increasingly acrimonious Sino-U.S. rivalry.

In a sign of a tightening partnership between the North and China, North Korean Ambassador to Beijing Ri Ryong-nam urged unwavering efforts to build on bilateral relations in an op-ed piece to China's People's Daily. Chinese Ambassador Li Jinjun also wrote an op-ed on the Rodong Sinmun, the daily of the North's Workers' Party, stressing the importance of bilateral cooperation.

"For the time being, the North is expected to focus on exchanges and cooperation with China while taking time to prepare for dialogue with the U.S.," Cheong of the Sejong Institute said.

Despite uncertainties over the dialogue between the U.S. and the North, South Korean officials are not losing hope that Seoul's "unwavering" efforts would pay dividends in the end.

"The Moon administration has been unwavering in its efforts to establish permanent peace on the Korean Peninsula from the very beginning, winning the full fledged support of the global community," Foreign Minister Chung Eui-yong said during a forum last week.

"Our efforts will continue until the U.N. values of peace, liberty and prosperity are fully established on the Korean Peninsula," he added.