BUSAN, June 23 (Yonhap) -- U.S. soldiers stationed in South Korea will be fined if they hold parties without wearing masks on and around a popular beach here during the coming U.S. Independence Day holiday amid the coronavirus pandemic, a local ward office said Wednesday.

The Haeundae Ward office in the southern port city of Busan said it will intensify monitoring of any unruly behavior on Haeundae Beach, together with local police and the U.S. Army Military Police, from July 2-4.

"We will sternly respond to violation cases, such as private gatherings of five or more people and no mask wearing, and impose a fine right away," a ward official said.

Starting next month, limits on private gatherings will be lifted in the non-capital area, as the government decided to ease social distancing rules in line with the nation's rising vaccinations.

But the ward office decided to maintain the ban on gatherings of five people or more on the beach during the three days to prevent overcrowding. 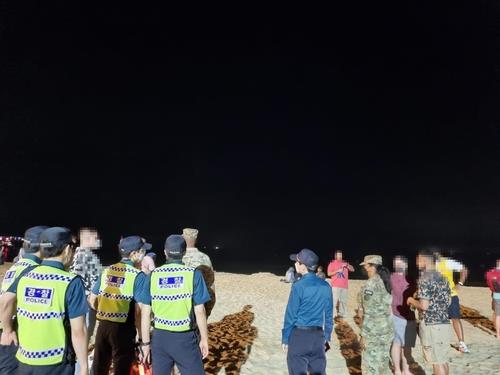 In July last year, some members of U.S. Forces Korea (USFK) and foreigners have come under public criticism for holding maskless parties on the beach amid the pandemic. Only one American soldier was fined for shooting firecrackers toward people.

Revelers descended on the beach again late last month in celebration of the U.S. Memorial Day.

The U.S. military is reportedly considering restricting its members from visiting the port city during the upcoming July 4 holiday.

The plan for a joint crackdown came after the ward office asked the USFK to help contain some of its members' unruly behavior that causes "anxiety and uneasiness" among others.