SEOUL, June 23 (Yonhap) -- North Korea's top diplomat on Wednesday categorically rejected a U.S. offer for talks, saying the country is not considering "even the possibility of any contact with the U.S."

Foreign Minister Ri Son-gwon made the remarks in a statement a day after Kim Yo-jong, the sister of North Korean leader Kim Jong-un, said that the U.S. has "wrong" expectations for dialogue with Pyongyang.

"We are not considering even the possibility of any contact with the U.S., let alone having it, which would get us nowhere, only taking up precious time," Ri said in the statement carried by the Korean Central News Agency (KCNA).

Ri added that his ministry welcomes "the clear-cut press statement" by Kim Yo-jong the previous day, "which is to brush off hasty judgment, conjecture and expectation of the U.S."

Her statement was seen by some as a demand for Washington to come up with more concrete concessions to resume denuclearization talks, rather than an outright rejection of the U.S. offer for talks.

North Korea's back-to-back statements came right after U.S. Special Representative for North Korea Sung Kim said in Seoul that Washington has offered to meet with the North "anywhere, anytime without preconditions" and looks forward to Pyongyang responding positively to the overtures.

Last week, North Korean leader Kim urged his country to be ready for both dialogue and confrontation with the U.S., raising cautious optimism that Pyongyang might be gearing up for denuclearization talks. 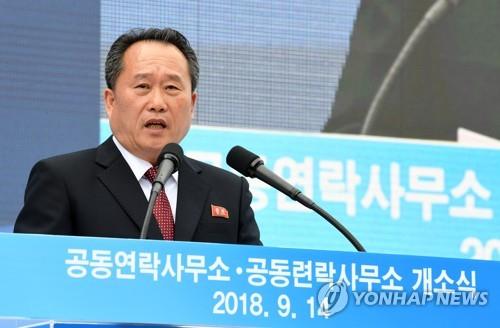 (LEAD) N. Korea rules out possibility of contact with U.S.

(LEAD) N. Korea rules out possibility of contact with U.S.