SEOUL/HANOI, June 23 (Yonhap) -- Foreign Minister Chung Eui-yong called for Vietnam's cooperation in addressing difficulties facing South Korean businesspeople, such as an extended quarantine period and other COVID-19 restrictions, during talks with his Vietnamese counterpart in Hanoi on Wednesday.

Chung's talks with Minister Bui Thanh Son came as Seoul seeks to cement economic ties with the Association of Southeast Asian Nations (ASEAN) under its New Southern Policy. He is on a five-day trip to the region, which includes visits to Singapore and Indonesia.

"Minister Chung explained in detail various difficulties, including delays in offering businesspeople exemptions from entry restrictions, the extension of a quarantine period and closures of factories, and requested Vietnam actively cooperate to address them," the foreign ministry said in a press release.

In a meeting with reporters later, Chung said that he asked Vietnam to shorten the period of quarantine Korean businesspeople must undergo upon arrival in the Southeast Asian country.

"I said that the four-week quarantine period after arriving in the country is too long," Chung said. "(The Vietnamese side) pledged to do its best to ensure that there will not be inconveniences for South Korean businesses' activities."

During Chung's talks with Vietnam's top diplomat, the two sides agreed to make earnest efforts to seek an elevation of their countries' bilateral relations from the current "strategic partnership" as they are to mark the 30th anniversary of bilateral diplomatic ties next year.

The two sides also discussed cooperation over equitable access to COVID-19 vaccines. Chung, in particular, said that South Korea plans to provide Vietnam with US$2.5 million worth of quarantine items this year to support the country's anti-virus efforts. 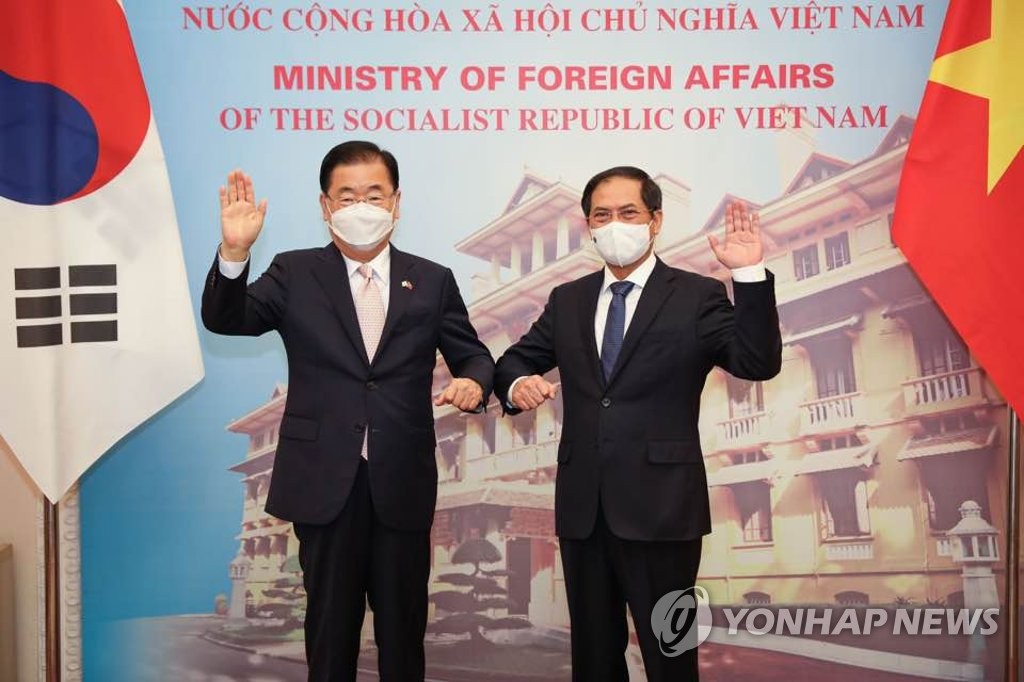