SEOUL, June 24 (Yonhap) -- The Bank of Korea (BOK) is ready to conduct its first post-pandemic rate hike "within this year" amid the economy's robust recovery from the COVID-19 pandemic, Gov. Lee Ju-yeol said Thursday.

Lee has hinted that the BOK could exit from pandemic-era monetary easing if an economic recovery remains solid, but it is the first time that he mentioned the timing of a rate hike.

"There is the need to orderly normalize monetary policy within this year," Lee told reporters.

Lee also took a more hawkish tone, saying there is a growing need for adjustment of monetary policy because financial imbalances worsened.

Lee made the remarks as the BOK expected consumer prices to stay around 2 percent in the second half of this year.

However, the country's core inflation, excluding volatile food and energy prices, is projected to exceed 1 percent as the nation's economy shows signs of a robust recovery from the COVID-19 pandemic, the Bank of Korea (BOK) said.

The BOK said South Korea's consumer inflation will likely expand further down the road in step with an improving domestic economy.

Also Thursday, the BOK warned that international commodity prices and the spread of COVID-19 have emerged as risks to inflation. 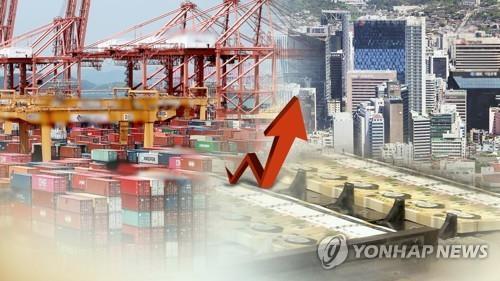 In February, the BOK forecast that South Korea's economy would grow 3 percent this year.

The BOK has also raised its forecast on inflation to 1.8 percent this year, compared with its earlier forecast of 1.3 percent.

In May, South Korea's consumer prices grew at the fastest pace in more than nine years on higher prices of farm and oil products, underscoring that inflationary pressure is building up.

It marked the fastest on-year increase since April 2012, when the price index also rose 2.6 percent.