SEOUL, June 24 (Yonhap) -- In a typical season, there are 10 of them in the South Korean baseball league, making contributions as a middle-of-the-lineup force or as a quality defender.

But for foreign position players in the Korea Baseball Organization (KBO) in 2021, it has been anything but typical.

KBO clubs can each acquire a maximum of three imports, with no more than two pitchers. Teams almost always opt for two starting pitchers and one hitter, usually a slugger who can bat in the middle of the lineup. The last club to put two foreign position players on the roster was the 2019 Samsung Lions; they had Mac Williamson and Darin Ruf, alongside pitcher Ben Lively, in the second half of the season. 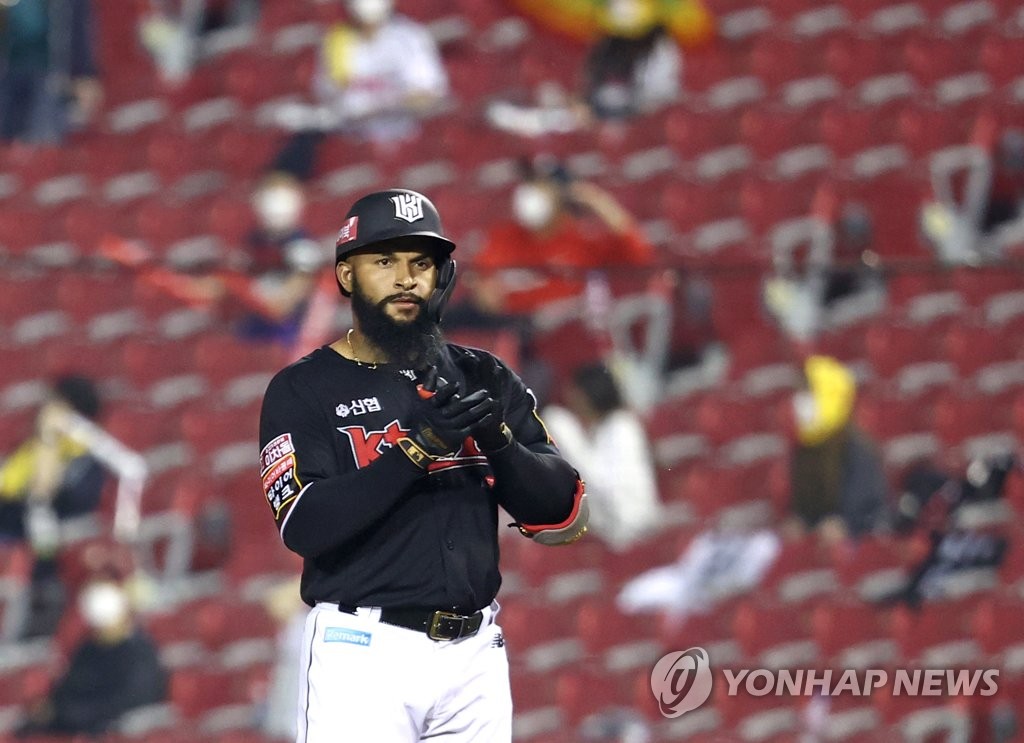 The 2021 season opened with 10 clubs each employing one foreign batter. As of Thursday, only six of those are on the active roster -- one has been cut and three are in the minor league -- and another could soon join them.

David Freitas of the Kiwoom Heroes became the first foreign position player to be released this season Wednesday. Freitas, who had been the Heroes' designated hitter and also made some cameo appearances as catcher, batted .259/.297/.374 with two homers and 14 RBIs in 43 games.

The Heroes demoted Freitas to the minor league for the second time this season Tuesday, hoping that he would find his stroke while getting more regular playing time. And then about 24 hours later, he was waived.

Kiwoom manager Hong Won-ki offered a mea culpa Wednesday, saying he missed his mark on both Freitas and starter Josh A. Smith, who was cut after just two appearances in April. 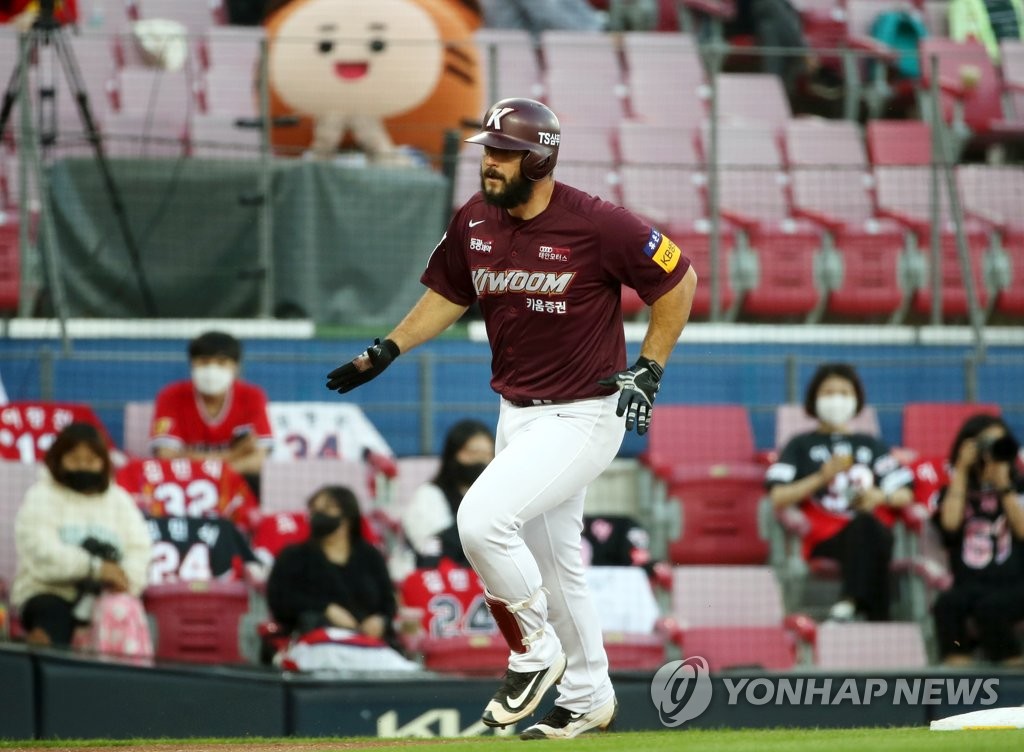 "Ideally, we'd like to have a home run hitter from overseas batting in the middle of the order and a couple of foreign aces go six, seven innings every time out," Hong said. "But this is the reality for us now. We have to accept it. As for the new hitter, I just hope it'll be a slugger. Defense comes second."

Also going down to the minors Tuesday was KT Wiz outfielder Zoilo Almonte, who suffered a slight tear in his right Achilles' tendon.

Almonte's offensive numbers are just fine, considering preseason expectations for him. He was batting .271/.336/.404 and had seven home runs with 36 RBIs in 60 games. Almonte was replacing the 2020 league MVP, Mel Rojas Jr., and wasn't expected to duplicate Rojas' monstrous numbers anyway.

When the Wiz announced their signing of Almonte, they gushed about his work ethic and enthusiasm that he brings to the field. Things haven't quite turned out as predicted though. Almonte has been facing persistent criticism for his lack of hustle on the base paths and in the outfield. 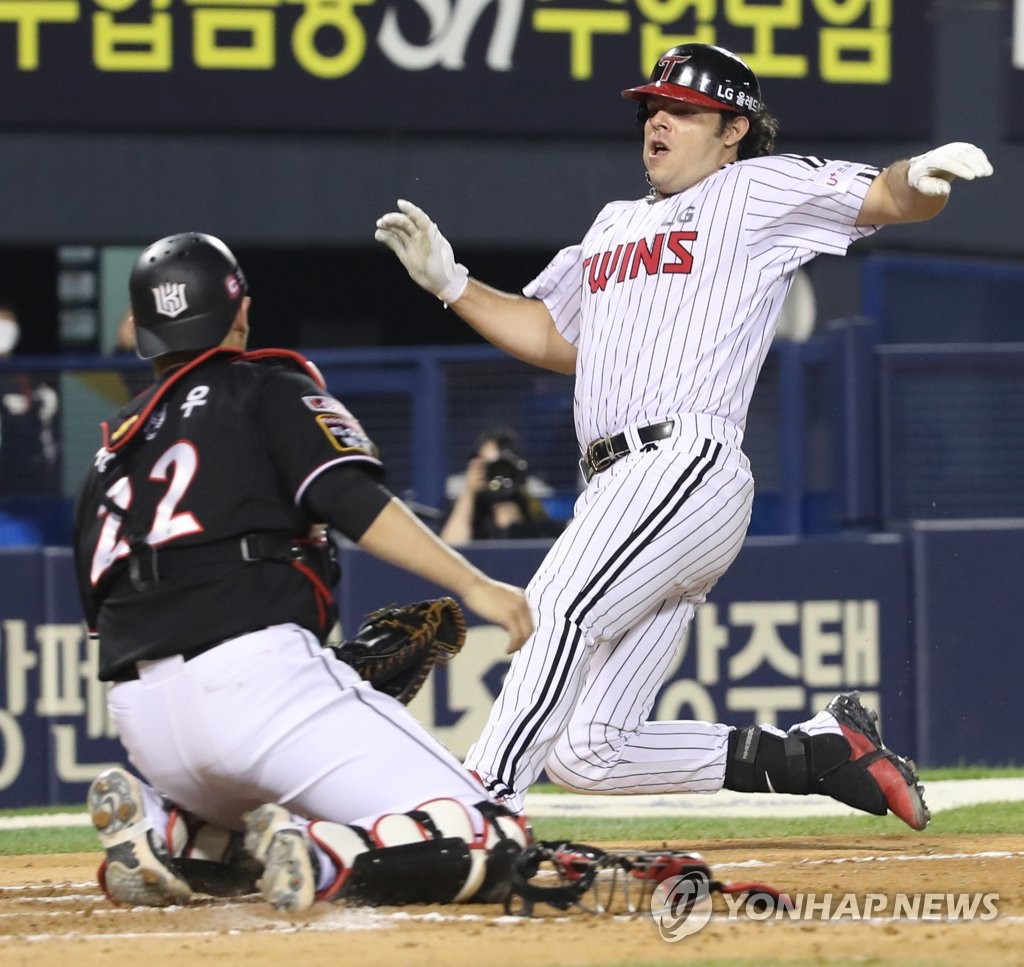 Some lingering hamstring issues, which Almonte dealt with while playing in Japan the past three years, may be holding him back. However, manager Lee Kang-chul said at the end of May that the hamstring injury was in the rearview mirror and questioned if Almonte just didn't have the drive.

The Twins haven't missed him much. They were in first place on June 9 at 31-23 and have gone 8-4 since to stay at the top. They're searching for a replacement for Ramos, according to sources.

At the start of this season, the Tigers moved Tucker, a longtime outfielder, to first base, a position he hadn't handled since Double-A in 2014. The experiment lasted just one month. Tucker was back in the outfield by early May, but the shift back to a familiar spot on the field hasn't translated to success at the plate. 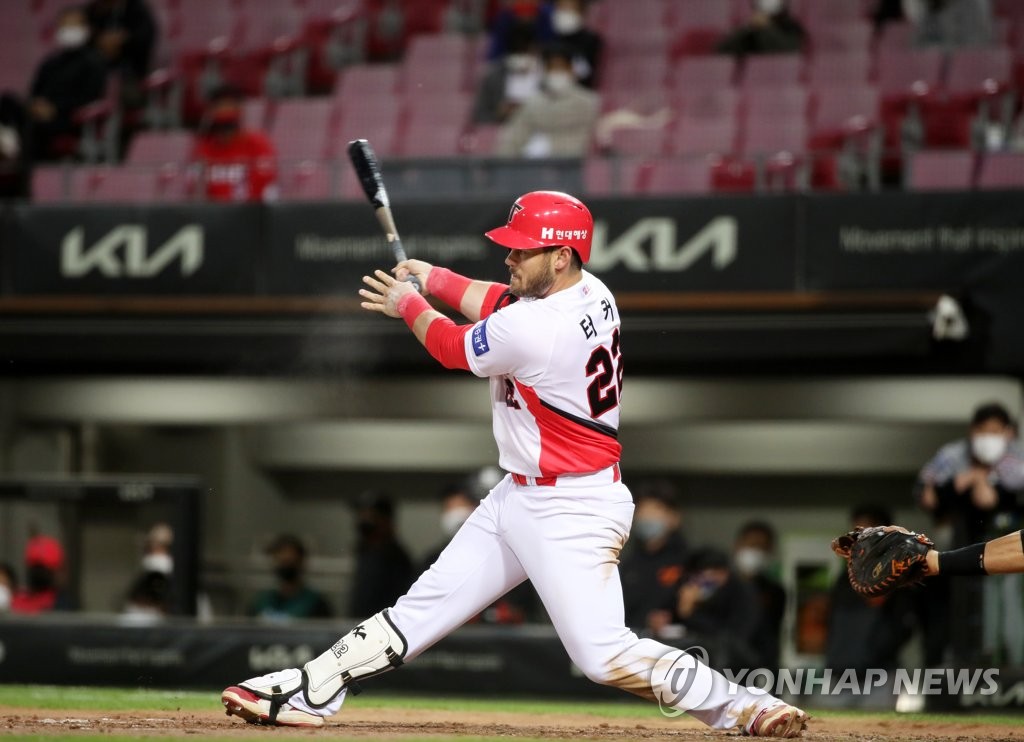 Ryon Healy hasn't been in the minors for the Hanwha Eagles yet, though it wouldn't be a total shock if they demoted him. He's batting .179 in his past 10 games, with 11 strikeouts against one walk. He does have three home runs in June, but when going deep three times in 20 games represents a power surge, that tells you all you need to know about Healy's season.

Healy has six home runs and 32 RBIs in 60 games overall in 2021. He has struck out 55 times and walked 14 times. The two-time 20-homer man from the majors has a slugging percentage of .388, behind two light-hitting middle infielders on the Eagles: second baseman Jung Eun-won and shortstop Ha Ju-suk.

Healy may be the next one to be released if he doesn't turn it around soon, though he's admittedly under much less pressure playing for the rebuilding Eagles than Freitas and Ramos on contending clubs. 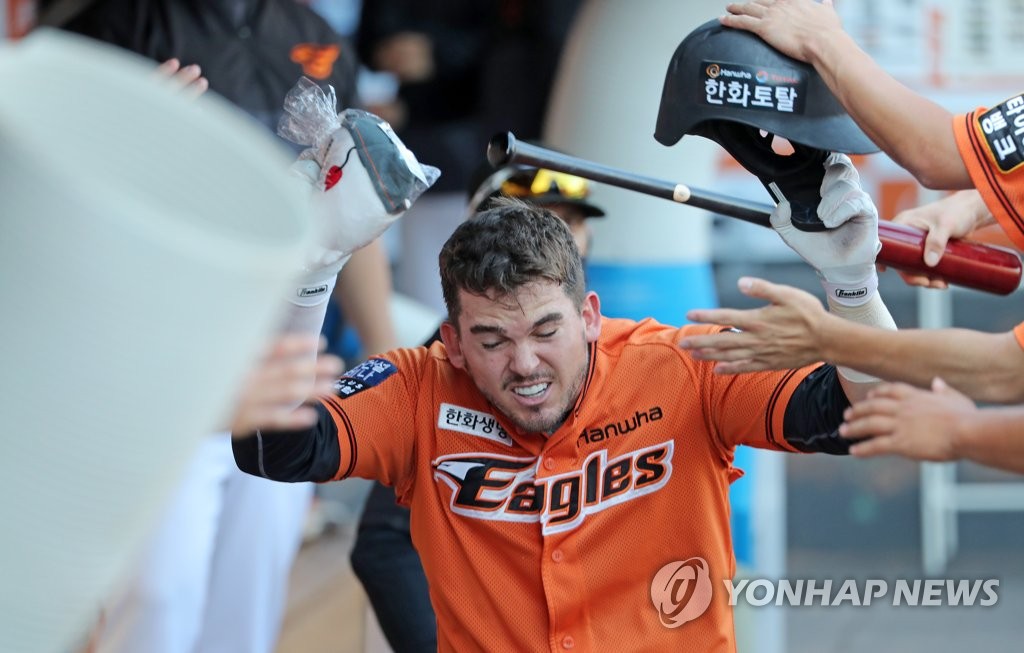 Among those making a positive impact on their clubs, Jose Pirela, the first-year outfielder/designated hitter for the Samsung Lions, stands out.

Pirela is second overall with 16 home runs, 55 RBIs and 88 hits in 66 games, and fifth in the league with an on-base plus slugging percentage (OPS) of .945. The hard-nosed Pirela is the polar opposite of Almonte, in that Samsung manager Huh Sam-young doesn't want Pirela to run so hard all the time and risk injury.

Now in his third KBO season, Jose Miguel Fernandez of the Doosan Bears is right around his career average with a .336/.408/.482 line. With 30 walks and 18 strikeouts, he's on pace to put up more BBs than Ks for the third straight season. He led the KBO in hits in each of the past two years and is currently in fourth with 83 hits in 63 games.

Jamie Romak of the SSG Landers is tied with Pirela with 16 homers and ranks second on the team with a .491 slugging percentage. The Canadian is the elder statesman among imports, as he's competing in his fifth season.

Lotte Giants' shortstop Dixon Machado isn't the same hitter as these mashers but has been one of the KBO's best defenders at any position in his two seasons here.

Kiwoom manager Hong said the replacement for Freitas may be joining the team a little too late, with nearly half of the 144-game season already in the books. All new foreign players must serve a mandatory two-week quarantine when they arrive in South Korea. 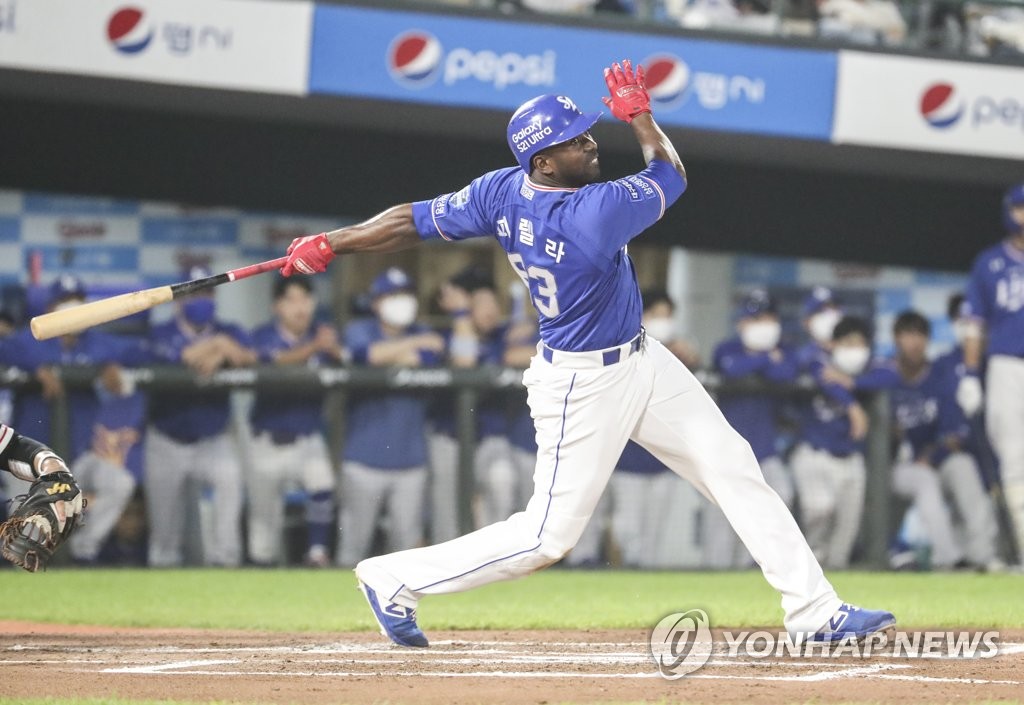 But there's an extended break to account for the Tokyo Olympics, from July 19 to Aug. 9, and new foreign players arriving in South Korea at the start of that period won't have to miss any games to quarantine.

Counting the amount of time it takes to process the player's work permit, and the need for the player to get back into playing shape following limited training during quarantine, teams could go as much as a month between the player putting the pen on the contract and finally suiting up for his first KBO game.

"The two-week quarantine is too much of a burden for teams. Even if the player is in great shape, you can't have him for at least two weeks. And that's 12 games during the season," one KBO scout said, requesting anonymity. "I think we'll see a few teams replace their foreign players during the Olympic break." 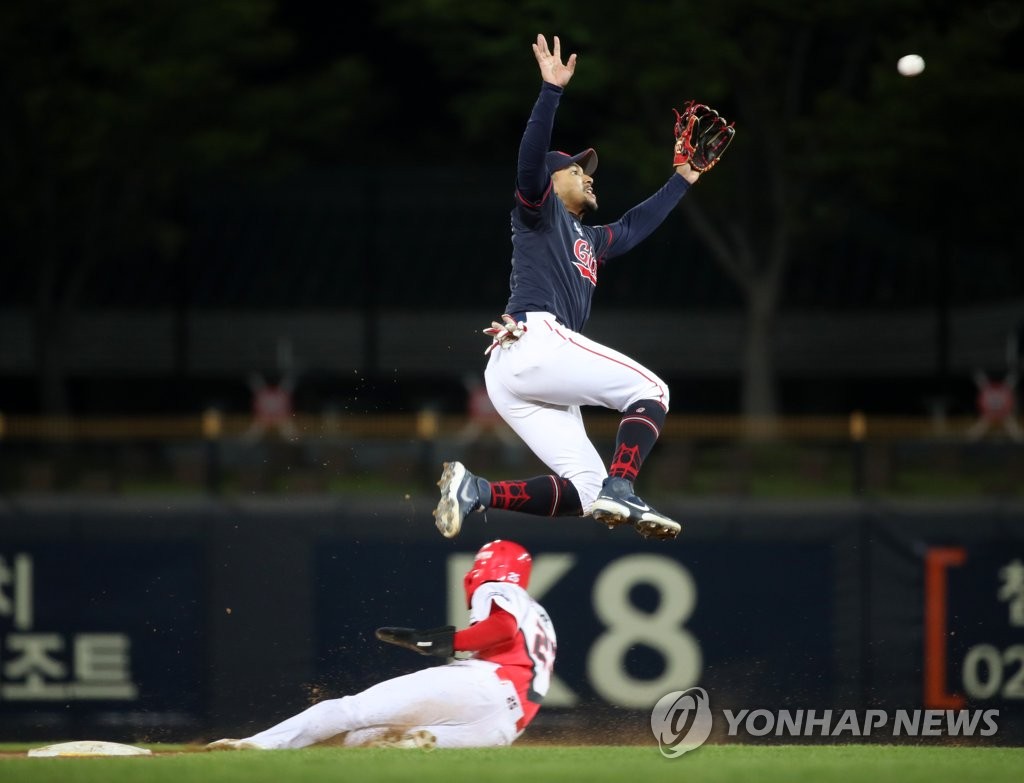