SEOUL, June 24 (Yonhap) -- President Moon Jae-in has reaffirmed his commitment to doing his best during the remainder of his tenure to reinvigorate the Korea peace process, according to the TIME magazine.

Speaking in a recent interview, posted on its website, Moon said, "The peace we have right now is a very fragile one; it can be shaken at any time."

"I know that I don't have much time myself," he added in the story headlined "South Korean President Moon Jae-in Makes One Last Attempt to Heal His Homeland." Moon's single five-year term is to end in May 2022. 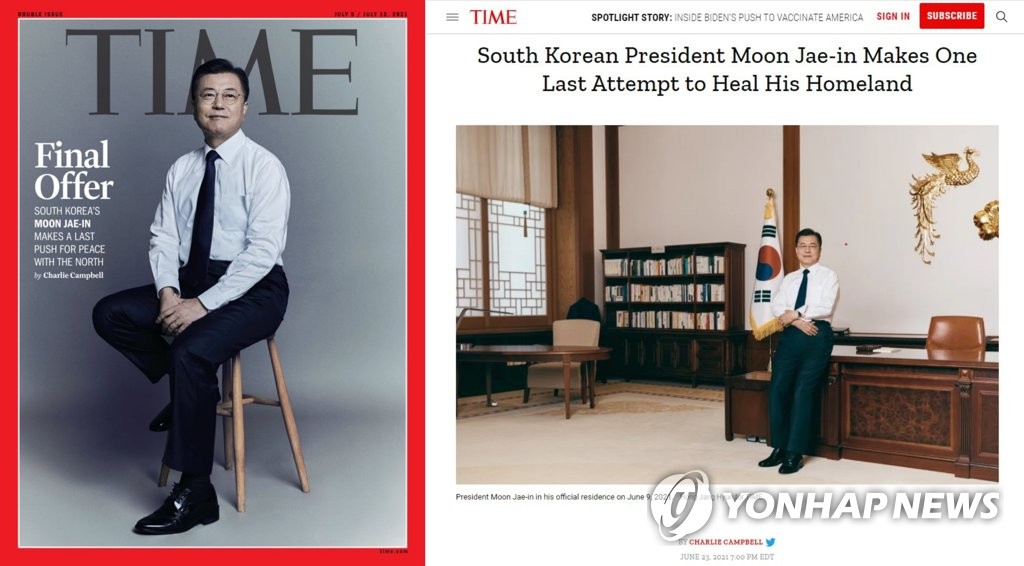 Moon recalled his three rounds of summit talks with North Korean leader Kim Jong-un and his 2018 visit to Pyongyang.

Asked about Kim's character, Moon described him as "very honest … very enthusiastic [and] one with strong determination" who has "a good idea of what is going on around the world."

Moon quoted Kim as "somberly" saying that he wants to "pass down a better future for his children."

Kim said he "did not want them to carry the burden of nuclear weapons," according to the president.

Moon was apparently referring to the possibility of a diplomatic resolution to the North Korean nuclear issue.

Meanwhile, TIME unveiled the cover of its July edition featuring a photo of Moon sitting on a chair. It has the title of "Final Offer."

Cheong Wa Dae said it is expected to be used in the magazine's Asia edition. Moon was interviewed at Cheong Wa Dae on June 9.

Moon appeared on the cover of the magazine published in May 2017 with the title of "The Negotiator: Moon Jae-in aims to be the South Korean leader who can deal with Kim Jong-un."