SEOUL, June 24 (Yonhap) -- Ex-Prosecutor General Yoon Seok-youl will declare his presidential bid next week, officially launching a political career three months after he stepped down from public office, according to his spokesperson Thursday.

Yoon will appear in front of the public in an event at 1 p.m. on Tuesday at the memorial hall for Yun Bong-gil, a national independence fighter, in southern Seoul, according to the spokesperson. He is set to announce his widely anticipated presidential bid there.

"I will speak to the public about the path I will take from now onward," Yoon said through the spokesperson.
Having topped a majority of public opinion polls for presidential hopefuls since late last year, Yoon has been gearing up to formalize his presidential bid.

The career prosecutor stepped down as prosecutor general on March 4, four months ahead of the official termination of his two-year tenure, in apparent objection to the ruling party's push for a sweeping prosecution reform.

"The spirit of the Constitution and the system of rule of law are crumbling. And it will cause damage to people. It is hard to watch common sense and justice collapsing," he said in his farewell speech back then.

In the upcoming event to declare his presidential bid, Yoon is expected to highlight the value of justice and common sense as well as patriotism as the key part of his campaign messages. 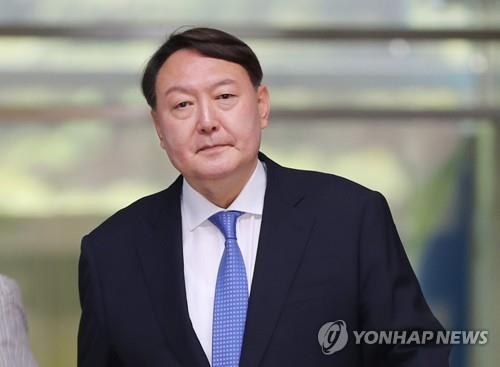