SEOUL, June 24 (Yonhap) -- About 130 civic groups in South Korea on Thursday called for stopping all discussions on a pardon of Lee Jae-yong, the imprisoned de facto leader of Samsung Group.

The civic groups, including Citizens' Coalition for Economic Justice, the Korean Confederation of Trade Unions and People's Solidarity for Participatory Democracy, held a joint press conference in Seoul to oppose any move to release Lee on parole or pardon. 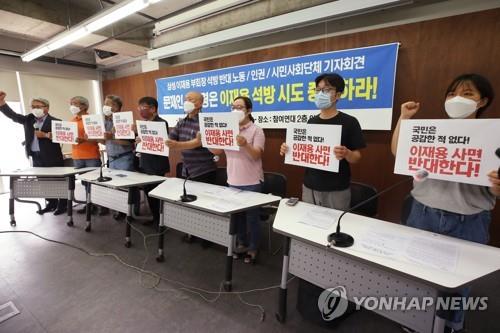 Lee, vice chairman of Samsung Electronics, was sentenced to 2 1/2 years in prison by the Seoul High Court on Jan. 18 in a retrial of a bribery case involving former President Park Geun-hye. Local business circles have petitioned for a pardon of Lee and some politicians have floated an idea of the Samsung heir being set free in time for the Aug. 15 Liberation Day.

But the civic groups raised objection to Lee's release, saying it will undermine democracy and the rule of law in South Korea.

"A release of Lee Jae-yong will damage common sense, democracy and the rule of law, all of which call for anybody who commits crimes to be properly punished regardless of status or wealth," the groups said.

They noted that Lee was found guilty of offering bribes to Park and her confidante Choi Soon-sil and is still on trial on numerous criminal charges.

They also argued that Lee's possible release will run counter to the Moon Jae-in government's promises to limit the president's pardon power and enforce a zero tolerance policy for serious economic crimes by conglomerates.