SEOUL, June 25 (Yonhap) -- North Korea appeared to be marking the anniversary of the outbreak of the 1950-53 Korean War in a low-key manner Friday as it is striving to fight the global coronavirus pandemic and bolster its anemic economy.

State media outlets have not reported on any anti-U.S. public rallies on the occasion of the 71st anniversary of the war. North Korea had held such street demonstrations around this time almost every year until the first-ever Singapore summit was held in 2018 between leader Kim Jong-un and then U.S. President Donald Trump.

The official Rodong Sinmun newspaper, in particular, carried just two articles on the Korean War on Friday, without any relevant photos.

In those articles, the North repeated its claims that the war broke out due to imperialists' invasion, and its late state founder and grandfather of the current leader, Kim Il-sung, led the nation to victory.

The paper, instead, reported on leader Kim joining a music performance held after a recent key party meeting, and a trip to a chicken farm under construction by Choe Ryong-hae, a top party official, in its front-page articles.

The Korean War broke out after North Korean troops invaded the South on June 25, 1950, with backing from China and the Soviet Union. It ended in a truce, not a peace treaty.

The North has claimed that the war started with the invasion by the South, while calling it the "Fatherland Liberation War" and celebrating the truce-signing date as Victory Day.

North Korea marks the anniversary of the conflict as it has been focused on its fight against the global coronavirus pandemic and striving to bolster its economic growth amid protracted border controls and global sanctions. 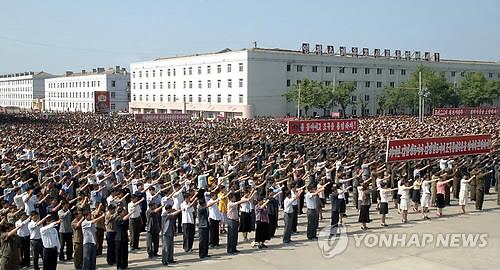