SEOUL, June 25 (Yonhap) -- The ruling Democratic Party (DP) on Friday decided not to postpone its primary elections to pick the standard bearer for next year's presidential election in March.

The DP's supreme council made the decision at a close-door meeting held earlier in the day, confirming the party's schedule to pick its sole presidential candidate before Sept. 10.

"The supreme council decided, via a unanimous agreement, to elect the (final presidential) candidate in accordance with the current party constitution," DP spokesman Koh Yong-jin said.

The decision follows the party's monthslong internal division on the issue.

The DP's internal constitution mandates the party elect its presidential candidate at least 180 days before the election day, unless otherwise decided by the party's administrative committee for "a considerable reason."

A group of DP lawmakers, notably those known as supporters of high-profile DP presidential hopefuls Lee Nak-yon and Chung Sye-kyun, have demanded the election of the final presidential candidate be put off to November.

They argued early primaries could fail to garner sufficient public attention due to the unabated COVID-19 pandemic. They also claimed the election of the rival presidential candidate by the main opposition People Power Party, slated for November, could steal the show if the DP's candidate is picked too early.

The calls, however, ran into fierce objection by supporters of another DP presidential runner, Gyeonggi Province Gov. Lee Jae-myung, who is currently leading the opinion polls of presidential hopefuls for the ruling bloc by an overwhelming margin. 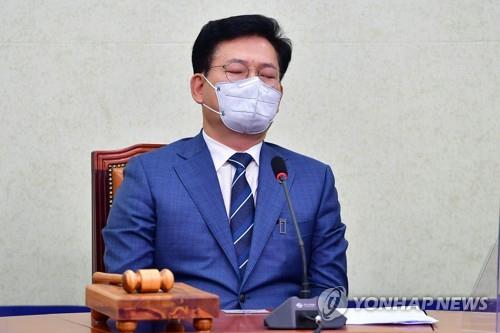 DP opts not to postpone primaries for next year's presidential election

DP opts not to postpone primaries for next year's presidential election