The defense project promotion committee, presided over by Defense Minister Suh Wook, approved the 2.89 trillion-won (US$2.56 billion) project expected to begin in earnest next year and to be completed around 2035, according to the Defense Acquisition Program Administration (DAPA).

"The project is designed to secure an interceptor system with our own technologies to boost our capabilities of countering enemies' long-range artillery threats so as to protect core facilities and military and security infrastructure," DAPA said in a release. 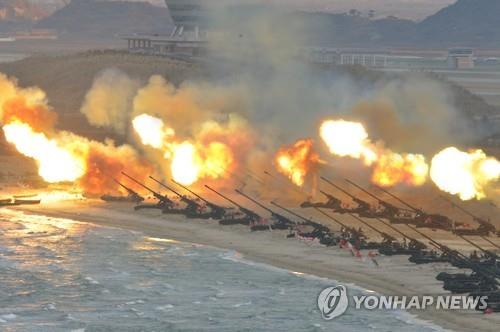 Last year, the defense ministry pledged to build such an air defense system as a longer-term plan. The Iron Dome is designed to detect, identify and destroy incoming threats, such as short-range missiles, artillery shells and unmanned aerial vehicles.

Pyongyang deploys around 1,000 artillery pieces along the Military Demarcation Line separating the two Koreas, including 240-millimeter multiple rocket launchers, most of which are directly aimed at Seoul and the metropolitan areas, according to military officials.

The North has also been working to advance its conventional weapons and showcased new types of short-range ballistic missiles and multiple rocket launchers over the past several years amid stalled denuclearization talks with the United States and chilled inter-Korean relations.

During the meeting, the government also approved a plan to upgrade F-35A next-generation fighter jets through a government-to-government foreign military sale (FMS) program with the United States.

Seoul has introduced the advanced stealth fighters since 2019 to beef up air defense capabilities under a plan to deploy 40 units by this year. The upgrades will require 370 billion won by 2030, according to DAPA.

It also decided to develop a homegrown vertical takeoff and landing unmanned aircraft for surveillance purposes by 2033 by earmarking 1.28 trillion won and to buy heavy-lift helicopters for the Army to replace aging CH-47 Chinook choppers by 2032 with a budget of 1.3 trillion won , the agency added.