The National Assembly Foreign Affairs and Unification Committee unanimously passed the resolution, which also calls on Tokyo to take sufficient measures to ensure the safety of radioactive water at the Fukushima plant. 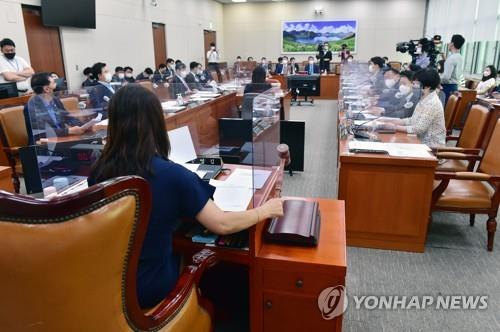 The resolution was prepared by ruling and opposition parties after the Japanese government announced a decision in April to start releasing massive amounts of radioactive water stored in tanks at the wrecked Fukushima nuclear plant in two years.

"The National Assembly of the Republic of Korea strongly condemns the Japanese government's unilateral decision to release Fukushima's contaminated radioactive wastewater into the sea and urges the immediate withdrawal of the decision," the resolution said.

"The National Assembly will never tolerate any action by the Japanese government that could harm the health of our people," it said, asking the Seoul government to devise effective countermeasures and take an active diplomatic response.

The resolution then asks Tokyo to choose the method for treating radioactive water through close consultations with neighboring countries, including South Korea.

It demands that the Japanese government scientifically and thoroughly verify the safety issues related to the contaminated Fukushima water and the South Korean government participate in the IAEA's joint investigation team to ensure transparent disclosure of the contaminated water treatment process.

The resolution is to be presented to the Assembly's plenary session slated for Tuesday afternoon.