SEOUL, June 29 (Yonhap) -- The National Assembly on Tuesday passed a special bill aimed at finding the truth about the South Korean government's bloody crackdown on civilians during a rebellion by left-leaning soldiers in the southwestern cities of Yeosu and Suncheon committed 73 years ago.

The special bill on the so-called Yeosu-Suncheon incident is also intended to restore the honor to civilian victims estimated by a ruling party lawmaker to reach up to 11,000.

The incident began on Oct. 19, 1948, when about 2,000 left-leaning soldiers in Yeosu, 455 kilometers south of Seoul, rose up in arms, after refusing an order to move to Jeju Island to crack down on leftist protests against the South Korean government, which had been established two months before. 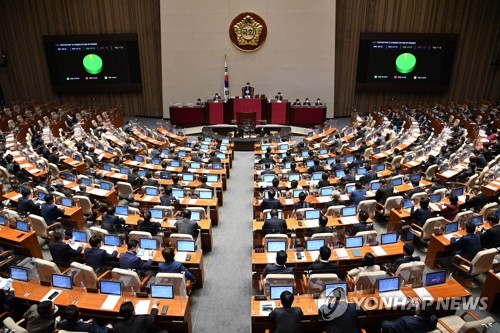 The military protest, which took place amid an impregnable ideological rift on the Korean Peninsula after its 1945 liberation from Japan's colonial rule, soon grew into a widespread uprising as civilians in Yeosu and nearby Suncheon joined the soldiers. The massive killing of civilians occurred during the authorities' crackdown on the anti-government movement.

The special bill calls for establishing a fact-finding and victims' honor restoration committee under the Prime Minister's Office and a relevant working committee under the gubernatorial office of South Jeolla Province, where Yeosu and Suncheon are located.

The committee will have the rights to find the truth about the incident and ask people subject to investigations and witnesses to submit statements and be questioned in person for two years after its establishment. It can also issue an order of accompanying for key witnesses who refuse to comply with summons more than three times.

The special bill also includes clauses calling on the state to provide medical and living support to the victims of the incident. The passage of the bill has come after four failed attempts since 2001.