SEOUL, June 29 (Yonhap) -- More than 300 police, government officials and officers of the U.S. military police will be deployed to Haeundae Beach in the southeastern city of Busan to prevent disorderly conduct during the U.S. Independence Day holiday, the foreign ministry said Tuesday.

Starting later this week, they will conduct joint patrols on and around the most popular beach in South Korea, including 16 officers from the U.S. Army Military Police and four officials from the foreign ministry. The rest will be police and local government officials, according to the ministry.

The joint patrols come after U.S. soldiers were criticized for engaging in unruly behavior, such as going maskless, heavy drinking and setting off firecrackers, around the beach area on their Memorial Day holiday in May and the Fourth of July holiday last year.

"We, as the ministry, intend to participate in the activity so as to help minimize the inconvenience and complaints for our people under the COVID-19 situation," a ministry official said.

"We also thought that it was necessary to make efforts to ultimately promote South Korea-U.S. relations by positively setting the relationship between our people and the U.S. forces in Korea," the official said.

A separate patrol squad, without the U.S. participation, will also work on and around the Gwanganli Beach, another tourist hot spot in the coastal city, during the period.

The Haeundae ward office has decided to maintain the ban on gatherings of five people or more on the beach during the three days to prevent crowding, in exception to the government's plan to ease the limits for non-capital areas starting July 1.

In July last year, some USFK members and foreigners came under public criticism for holding maskless parties and setting off firecrackers on the beach amid the pandemic. Few of them were held accountable.

The Haeundae Ward office has warned it will fine U.S. soldiers if they violate the distancing and other rules during the Independence Day period.

The USFK has said it will not tolerate any behavior that violates South Korean laws, vowing to take measures to help maintain public order during the holiday period. 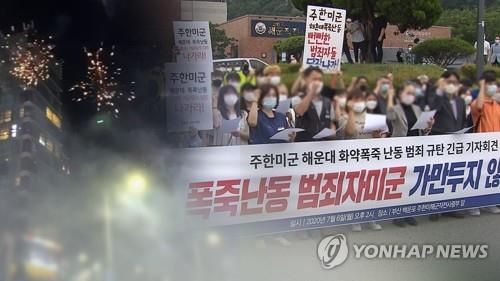