SEOUL, June 30 (Yonhap) -- In his 12 years of professional baseball, Jared Hoying has never won a championship.

Now about to embark on his second tour of duty in South Korea, the American outfielder has as good an opportunity as ever to finally get that elusive title.

Hoying signed with the KT Wiz over the weekend, replacing outfielder Zoilo Almonte for the rest of the 2021 Korea Baseball Organization (KBO) season.

The Wiz are in first place through Tuesday's action. The expansion franchise made the postseason for the first time in 2020, finishing second in the regular season advancing straight to the penultimate round. They lost to the Doosan Bears there, and this year, they've set their sights on a deeper postseason run. 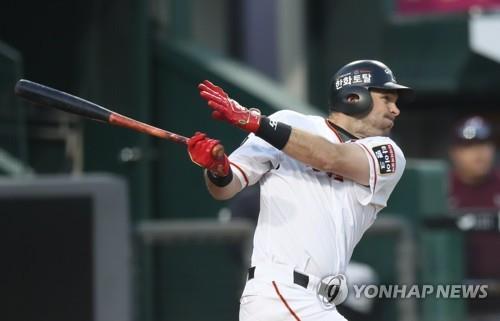 And Hoying himself can't wait to join the contending club.

"Jumping in and joining KT, the first-place team, I couldn't be more excited," Hoying told Yonhap News Agency in a phone interview from the United States on Tuesday. "I am hoping this is the year and hopefully I can help and be a big member of KT and we can win a championship."

Hoying is walking into a vastly different situation than the last time he played in the KBO.

But a lot of losing followed the next two years. The 2020 season was particularly tough for the Eagles, as they lost 18 straight games to tie the KBO record and went through an early-season managerial change. Hoying ended up hitting just .194 with four home runs and 14 RBIs in 34 games before the Eagles showed him the door. 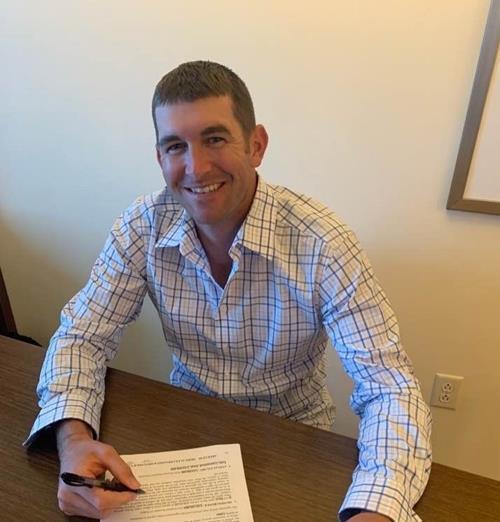 Hoying admitted the season "felt like work" to him. But winning a few games with the Wiz should be more fun. And Hoying said as long as his team puts up Ws, nothing else matters.

"When you're on a winning team, that's all that matters. You don't care about your stats. All you care about is winning," Hoying said. "Then when you look at the season, everybody's stats look pretty good because you know everybody was so focused on playing hard and playing games the right way, and doing the little things and doing whatever it takes to try to beat the other team."

And the Eagles will be among those other teams that Hoying will try to beat. He said his first at-bat against them will "feel a little different," especially if the Wiz are visiting the Eagles.

"But after that, it will just feel like any other game," he added. "Just play hard and have fun."

Following Hoying's signing, KT manager Lee Kang-chul said he was counting on Hoying for work ethic and outfield defense. With Almonte unable to play in the outfield full-time because of lingering health issues, Lee has had to rely heavily on veteran players to handle outfield defense when they could have used occasional breathers as designated hitters. 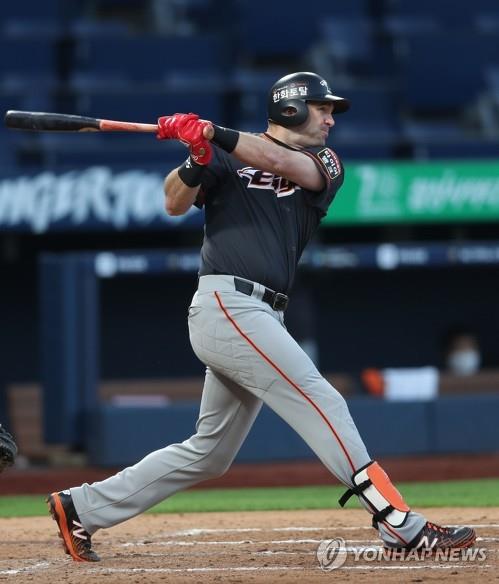 Hoying said there's much more that he can offer.

"I feel like I'm a very versatile player," Hoying said. "I can throw a runner out if I need to. I can hit a home run if I need to. I like to lead by example. So hopefully, I can elevate some of the other players' game a little bit by just playing hard and always trying to be positive, and trying to be a good influence for those guys."

Hoying isn't too concerned that many KBO pitchers, having already faced him, will know how to attack him and exploit his weaknesses.

"I know when I'm in a good spot mentally and physically, I can hit anything and I can hit anybody," he said. "It's just a matter of being consistent. And when you feel good at the plate, you're able to make those in-game adjustments a lot easier."

Hoying took a long and winding road back to the KBO. After being cut by the Eagles last summer, Hoying couldn't land with any major league club, and the 2020 minor league season was canceled due to the coronavirus pandemic.

Then in May this year, Hoying signed a minor league contract with the Toronto Blue Jays. After training for a week in Florida, Hoying joined the Blue Jays' Triple-A club in Trenton, New Jersey.

And a couple of weeks ago, the Blue Jays called up Hoying, after one of their regular outfielders, Teoscar Hernandez, went on paternity leave. Hoying played on June 18 and 19 against the Baltimore Orioles, his first big league games since October 2017 with the Texas Rangers. 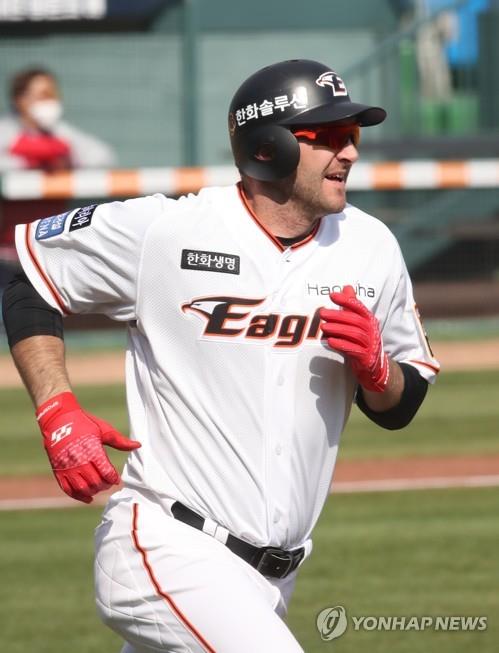 "I went from working out at home and just hoping to get a job somewhere to getting a job with the Blue Jays. To get back to the big leagues, even if it was only for a couple days, it was just awesome," he said. "I had a good experience with Texas, but I was younger and everything seemed a little more stressful. But here with the Blue Jays, the way they treated me, I'll never forget. For a random guy coming in that nobody knew, they treated me so well and made me feel so comfortable right away."

Once Hernandez returned, Hoying became the victim of number crunching and was taken off the Blue Jays' 40-man roster. Then the Wiz pounced on the veteran free agent with prior KBO experience.

With the new deal in tow, Hoying will only look forward from here.

"I'm 32 years old. They got prospects, and they got guys that need to play. I understand how the business side of it works," Hoying said. "I heard KT was looking (for a new player) a little bit. I kind of thought, 'They are a really good team. I know some of the guys on the team already. Wouldn't it be amazing if that worked out?' And sure enough, it all worked out."

Once Hoying takes the field in the KBO -- he expects to arrive in South Korea in a week to 10 days, which will be followed by a mandatory two-week quarantine -- he'll have a chance to go up against his former Rangers teammate, Choo Shin-soo. 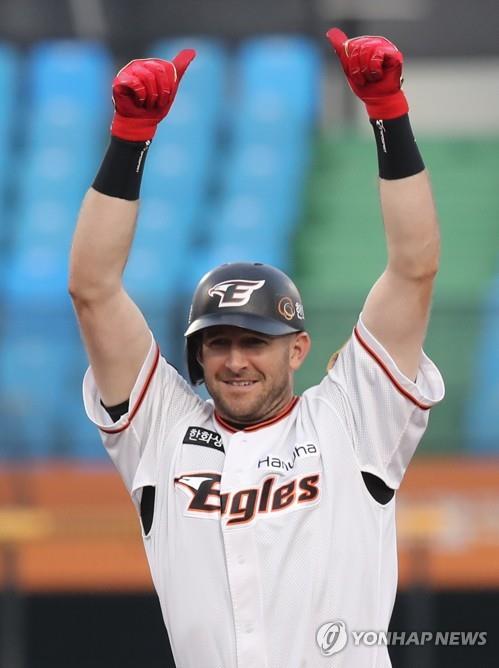 Choo wrapped up his 16-year big league career to sign with the SSG Landers earlier this year. Choo and Hoying were teammates in 2016 and 2017, and shared the postseason stage in 2016 in the American League Division Series against the Blue Jays.

"I'm pretty excited to see Choo. It's going to be a fun story to tell everybody: how we used to play together with the Rangers, and then now we're playing against each other in the KBO," Hoying said. "As a fellow outfielder, he treated me great, so I have nothing but good things to say about Choo."

Hoying didn't get to play in front of any fans in 2020, as the KBO clubs played the first half of the year behind closed doors due to effects of COVID-19. Teams have been accepting fans at limited numbers this year, and gates will swing open even wider in July, when teams will be able to operate at as much as 70 percent capacity under eased social distancing rules.

Hoying got to experience the KBO cheering culture in 2018 and 2019, and he'd like nothing more than to enjoy that again.

"The thing I probably miss the most (about the KBO) is the fans," he said. "There is nothing better than hearing a whole stadium chant your name after a home run or a diving play in the outfield." 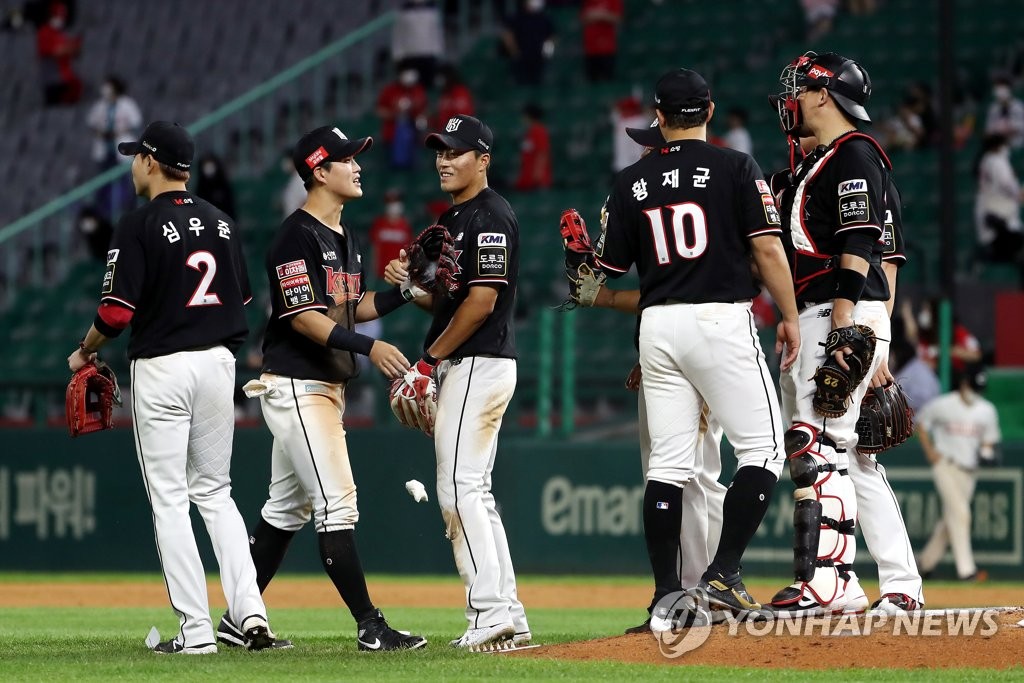