(ATTN: UPDATES with the phaseout of investment in oil refining business in paras 11-12)
By Kim Eun-jung

SEOUL, July 1 (Yonhap) -- SK Innovation Co. said Thursday it will invest 30 trillion won (US$26.5 billion) over the next five years to transition from a carbon-intensive model to green business and is considering splitting its battery business as a way to raise funds needed to further foster the new growth driver.

The energy and chemical subsidiary of the nation's No. 3 conglomerate, SK Group, said it aims to increase the ratio of eco-friendly business from the current 30 percent to 70 percent by 2025 to reduce its carbon footprint and create new business opportunities, CEO Kim Jun said in a press conference. 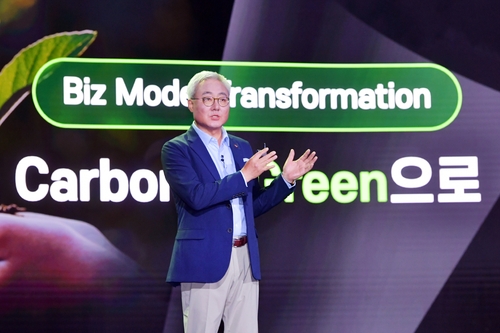 SK Innovation, the world's No. 6 battery maker, said it has bagged over 1 terawatt-hours worth of EV battery orders estimated around 130 trillion won and expects additional deals from global automakers.

Its clients include Volkswagen and Ford in the United States, Daimler in Europe, and Hyundai Motor and Kia in Asia, and rolls out batteries in factories in South Korea, China, the U.S. and Hungary.

Last month, SK Innovation and American automaker Ford Motor said they will establish a 6 trillion-won joint venture to build a battery factory with 60 gigawatt hours of production in the U.S. by the mid-2020s.

"We will become the world's third-largest battery maker in terms of the monthly sales in late 2022," Ji Dong-seop, the chief of SK Innovation's battery business, said during the conference.

The company said it will ramp up the battery production capacity from the current 40 GWh to 200 GWh in 2025 to meet growing demand, raising prospects of generating 2.5 trillion won of earnings 2025.

SK Innovation said it is considering splitting its battery business to raise additional funds needed to step up its manufacturing capacity in the coming years.

"The company has not yet decided how to split (the battery division), but we are constantly considering it as a way to secure resources," Kim said. "But the proposal would need more discussions in the board of directors and should get approval from shareholders before making a decision."

In sharp contrast with its battery business, SK Innovation plans to phase out its new investment into oil refining business, which takes up over half of its overall business, the company said.

The company is also considering producing petrochemicals instead of transport fuels, such as gasoline and diesel, as demand for transport fuels is expected to fall due to increased use of electric vehicles.

After establishing the new corporate structure, SK Innovation will serve as a holding firm in charge of developing its eco-friendly business portfolio and push for a merger and acquisition in the green business, the firm said.

Shares in SK Innovation closed 8.8 percent down to 269,500 won on the Seoul bourse, following its announcement that it may split its battery business.

Market watchers speculate SK Innovation may push for an initial public offering (IPO) of the independent battery business and explore ways to form joint ventures to continue to make large investments in the promising sector.

"The spin-off is one of the most sensitive issues in the market, which seems to have affected its share prices," Hwang Kyu-won, an analyst at Yuanta Securities, said. "As SK Innovation said it is considering splitting its battery division, it is likely to push for its IPO."