(ATTN: UPDATES with remarks from a senior State Department official on North Korean defectors in China in paras 12-14)
By Byun Duk-kun

The North Korean regime is one of 11 governments with a "policy or pattern" of human trafficking, according to the Trafficking in Persons Report.

North Korea was put on the shortlist of 12 countries in 2020 and again this year with 11 nations.

"The 2021 Trafficking in Persons Report includes the following 11 governments with a documented 'policy or pattern' of human trafficking, trafficking in government-funded programs, forced labor in government-affiliated medical services or other sectors, sexual slavery in government camps, or the employment or recruitment of child soldiers," said the report. 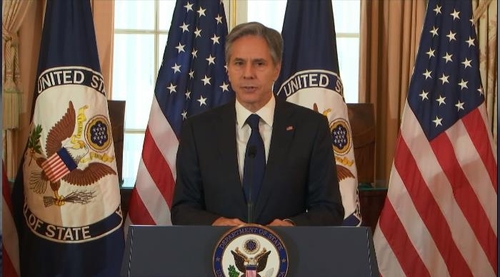 "This year's report focuses on state sponsors of human trafficking. We documented 11 countries where the government itself is the trafficker," Secretary of State Antony Blinken said at a press conference.

"Governments should protect and serve their citizens, not terrorize and subjugate them for profit," he added.

The report noted most of the state sponsors of human trafficking, along with many others such as Kenya, Malaysia and Thailand, also harbored North Korean workers forced into free labor by the North Korean government.

"The government of Russia had a government policy or pattern of trafficking. The government was actively complicit in the forced labor of North Korean workers," it said.

"Many North Korean refugees and asylum-seekers living irregularly in the PRC are particularly vulnerable to trafficking," it added, referring to China by its official name, the People's Republic of China.

A State Department official expressed concerns over North Korean defectors in China being returned to their homeland where they are said to face severe punishment.

"We have long noted concerns in the TIP Report in both the China and the North Korea narrative for many years -- our concerns about defectors or other North Korean nationals being returned to North Korea and the risk that they face to forced labor, other forms of trafficking and other human rights abuses," the senior official said in a telephonic briefing while speaking on condition of anonymity.

"We have included a recommendation in the China narrative for many years and have raised this issue with the Chinese government. We encourage them not to return people back to North Korea, particularly without screening for human trafficking, since we know this is a population that's particularly vulnerable to human trafficking," the official added.

"The government of the Democratic People's Republic of Korea (DPRK or North Korea) does not fully meet the minimum standards for the elimination of trafficking and, even considering the impact of the COVID-19 pandemic, if any, on its anti-trafficking capacity, is not making significant efforts to do so; therefore North Korea remained on Tier 3," said the report.

It marks the 19th consecutive year that the North is placed on Tier 3 since the U.S. began publishing the annual report in 2001.

The report said women and children in North Korea are often exploited in sex trafficking while forced labor there remains part of an "established system of political repression and a pillar of the economic system."

While Blinken said human trafficking is an appalling crime that is an "affront to human rights" and "human dignity," he insisted the U.S. report was not merely aimed at calling out others, noting this year's report evaluates conditions in 188 countries, including the United States.

"I often talked about how the most urgent challenges facing our world cannot be solved by any one country acting alone. That's true for stopping COVID. It's true for dealing with the climate crisis. It's true for the fight against human trafficking," said the top U.S. diplomat.

"We need to work together, share information, hold each other accountable. That's how we'll create a world where no one is exploited by trafficking, and everyone is able to live in safety and in dignity," he added.