SEOUL, July 2 (Yonhap) -- South Korea's top economic policymaker and the chief of the central bank said Friday the fiscal and monetary policies should be operated in harmony as the country faces growing economic risks despite an accelerating economic recovery.

The remarks came as Finance Minister Hong Nam-ki and Bank of Korea (BOK) Gov. Lee Ju-yeol held a breakfast meeting earlier in the day amid concerns that the country's expansionary fiscal policy is not in sync with the central bank's move toward monetary tightening.

"It is desirable (for the government and the BOK) to operate the fiscal and monetary policies in a mutually complementary manner in accordance with economic situations and the policies' respective roles," the finance ministry and the BOK said in a joint statement after the meeting.

They also shared the view that the BOK needs to adjust the accommodative monetary policy stance in a bid to reduce the side effect of a long streak of low rates. 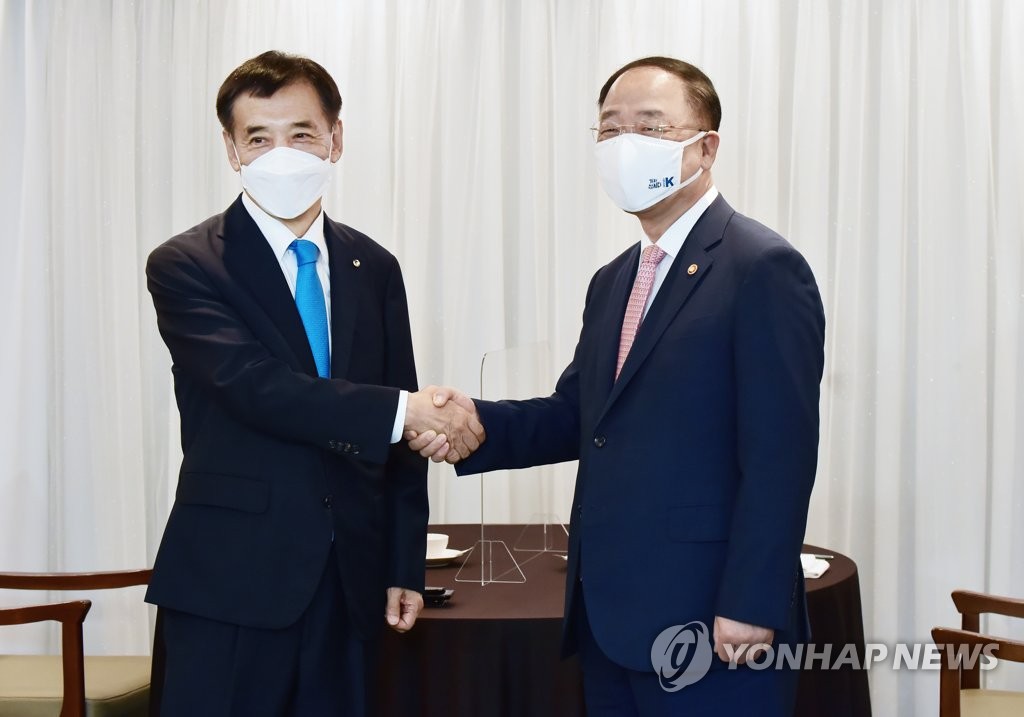 Concerns have mounted that the fiscal and monetary policies may be at discord as the government has sought to create another extra budget amid a looming rate hike by the BOK.

The government proposed an extra budget of 33 trillion won (US$29 billion) Thursday to fund another round of COVID-19 relief aid packages for people in the bottom 80 percent income bracket and smaller merchants hit by the pandemic.

BOK Gov. Lee said last week the central bank is ready to raise the key interest rate "within this year," stressing the need to orderly normalize its monetary policy amid the economic recovery.

The government has said that it is a "policy mix" under which the country supports vulnerable people with the fiscal policy, while the monetary policy focuses on easing financial imbalances.

Hong and Lee, meanwhile, assessed that the South Korean economy is fast recovering from the fallout of the pandemic, but the recovery remains uneven across sectors and the full recovery of the job market will likely take time.

They voiced concerns about a buildup in financial imbalances, saying that money has excessively flowed into the stock and property markets and the household debt has fast grown, according to the ministry.

The government raised its 2021 growth outlook for Asia's fourth-largest economy to an 11-year high of 4.2 percent from 3.2 percent. The BOK forecast economic growth of 4 percent.