SEOUL, July 5 (Yonhap) -- The International Committee of the Red Cross (ICRC) remains committed to humanitarian assistance for North Korea and ready to resume suspended projects in the country as soon as coronavirus situations improve, the head of its office in Seoul said.

In a recent interview with Yonhap News Agency, David Maizlish, chief of the ICRC's Seoul mission, also took note of North Korea's recent emphasis on cooperation with the ICRC and other global humanitarian organizations amid its prolonged border closures due to the coronavirus pandemic.

It was Maizlish's first interview with local media since he took office in December.

"We want to reiterate our commitment to carrying out humanitarian activities, in collaboration with the DPRK Red Cross Society and authorities, to jointly address the humanitarian needs in the country," Maizlish said, using the acronym of the North's official name, Democratic People's Republic of Korea.

"Once the situation allows, we will see the possibility of resuming the suspended activities and even develop our programs, depending on the assessment we could make of the situation there," he added. 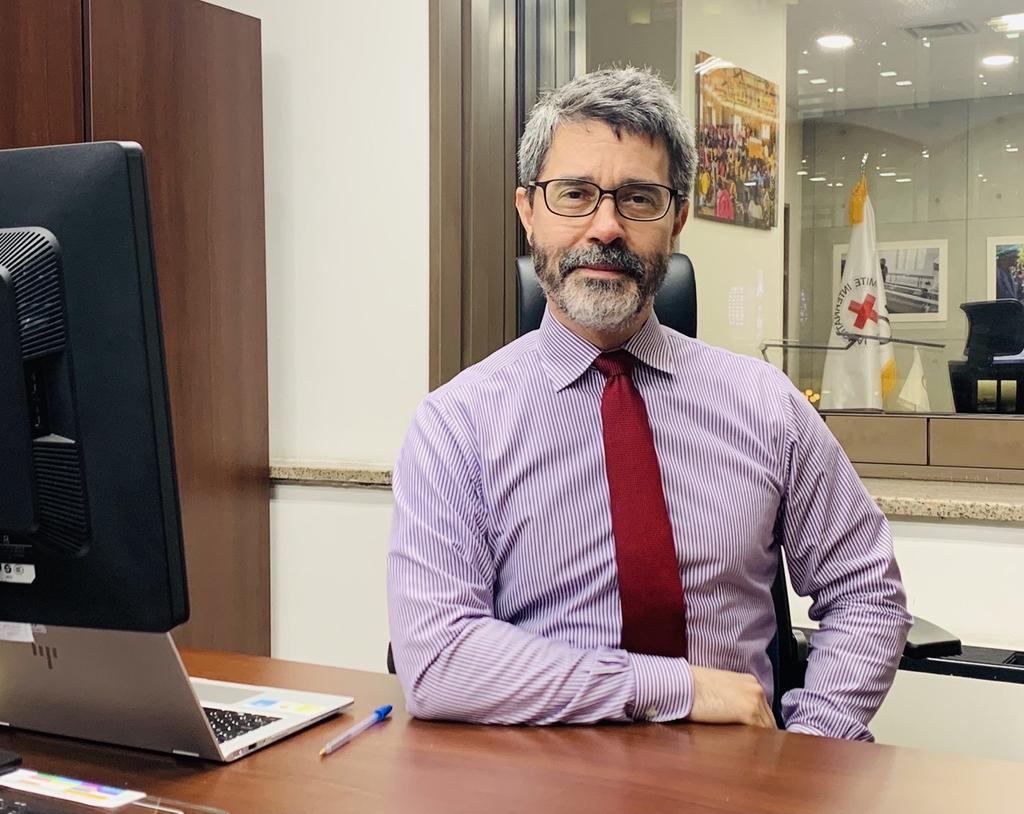 North Korea has claimed to be coronavirus-free but taken stringent measures, including a border closure since early last year, which have apparently hampered shipments of humanitarian assistance to the country, not to mention its negative impact on the overall economy.

Like other humanitarian organizations, the Geneva-based ICRC is having trouble getting its new staff into the North to replace those finishing up their assignments due to tight border controls.

The ICRC had maintained six foreign workers at its Pyongyang office, but it scaled down the number to two early last year as it could not bring in new members. The last remaining two left North Korea late last year, leaving no one at the Pyongyang office.

Experts say that prolonged border closures and suspended or scaled-down assistance projects inside North Korea must have aggravated living conditions for many people there already under heavy strains from chronic food shortages and global sanctions on its economy.

Against this backdrop, North Korea recently reported that it held a Red Cross meeting and highlighted the importance of cooperation with global organizations, including the ICRC, to achieve its "strategic goals."

This can be seen as a signal, though subtle, that North Korea might consider receiving outside help and allow the resumption of suspended projects by such organizations.

"The ICRC welcomes this gesture and stands ready to work more closely with the DPRK on humanitarian issues of common interest," Maizlish said.

He admitted that due to the global pandemic, a "limited number of humanitarian activities" have been carried out in North Korea through the ICRC's office in Beijing, saying the ICRC is closely monitoring the situations there to normalize its operations.

"We are not closing our operations in the DPRK. Our mission remains open with a limited number of local staff," he said."We are monitoring the situation and will continue to communicate with the DPRK Red Cross Society and the authorities. Once the conditions allow, we will resume these discussions (on getting foreign workers to the North)."

With regard to cooperation with South Korea on global humanitarian issues, Maizlish expressed appreciation for Seoul's support for the ICRC's efforts in many countries and vowed efforts to strengthen bilateral ties.

"The ROK government's support has helped the ICRC work with affected populations in armed conflict contexts, such as Syria, Iraq, South Sudan, Myanmar, Indonesia and Mozambique," he said. ROK is the acronym of South Korea's official name, the Republic of Korea.

"We greatly appreciate the government of the ROK and the Korean people for their support to our operations worldwide. The ICRC Seoul Mission also works closely with its partner organization, the Korean National Red Cross," he added.

Launched in 1863, the ICRC is one of the oldest global humanitarian organizations involved mainly in wartime assistance. It opened its offices in North and South Korea in 2002 and 2015, respectively.