Lee, also a former five-term lawmaker and ex-chief of the ruling Democratic Party, announced that he will join the race to win the party's ticket to run in the March 9 presidential election.

With the slogan of "a country that safeguards my life," Lee focused his campaign message on his pledges to relieve the country's growing economic disparity and beef up the national welfare system.

"The middle class, which represented 65 percent (of the country's population) 10 years ago, has now come down to 57 percent," Lee said, announcing his presidential bid via his YouTube channel. "I will build a middle class (oriented) economy. I will expand the proportion of the middle class to 70 percent."

He added that "society becomes stronger against a crisis and its inequality gets alleviated when the middle class makes up a big portion."

Lee also committed to "a new national welfare system" that will guarantee more robust social mobility and the prevention of the inheritance of social class.

"Social disparity is growing day by day. Growing inequality is becoming even more aggravated with the outbreak of COVID-19," he pointed out, pledging to rebuild justice. 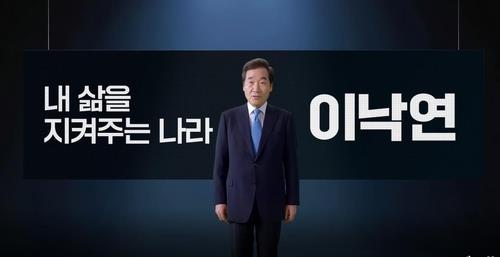 On the national security front, Lee stressed that Seoul should build a lasting peace on the Korean Peninsula via "institutions," saying a comprehensive accord, combined with phased implementations could settle the North Korean nuclear issue.

He said Seoul needs to step up its role to achieve the proposed process.

Formerly a journalist with the Donga Ilbo daily, Lee entered politics under the auspices of former President Kim Dae-jung and won his first parliamentary seat in 2000.

Throughout the first half of 2020, Lee was the unrivaled front-runner in opinion polls for presidential hopefuls, for not only the ruling bloc but also all political circles.

He later gave way to DP-affiliated Gyeonggi Gov. Lee Jae-myung as the front-runner for the ruling bloc.

According to a recent poll, released by Gallup Korea Friday, ex-Prosecutor General Yoon Seok-youl was leading the race with 25 percent of support, closely followed by Lee Jae-myung at 24 percent.

Lee Nak-yon came in third with 6 percent of support, lagging behind the two by a wide margin. 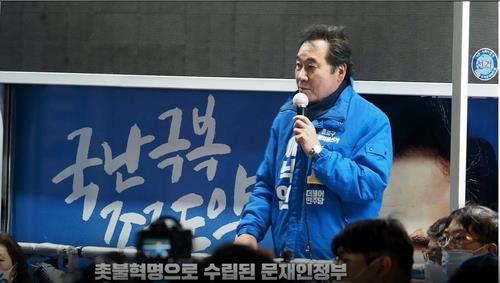 He faces a daunting task of coming up against the Gyeonggi governor's predominance, to become the ruling party's standard-bearer in the presidential election.

The party's mainstream appears to harbor qualms about the Gyeonggi governor's presidential bid after he made an enemy of party members backing Moon, while running against Moon in the previous presidential primary.

In a move widely seen as aimed at countering Lee's predominance, two DP presidential hopefuls, Chung Sye-kyun and Lee Kwang-jae, announced earlier in the day their decision to merge their campaigns under Chung's presidential bid.

"By securing a stable victory in the presidential election, I will definitely help create another (DP-affiliated) presidency," Chung noted. 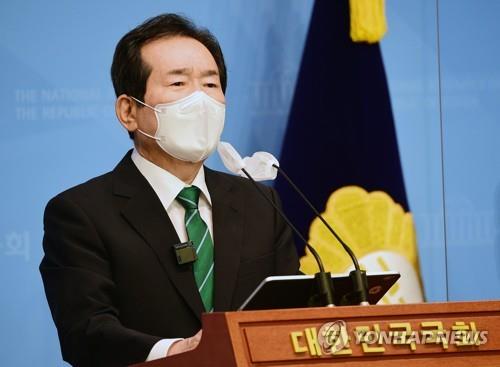