The agreement was made during a meeting earlier in the day between Rep. Han Byung-do and Rep. Choo Kyung-ho, deputy floor leaders of the ruling Democratic Party and the main opposition People Power Party, respectively.

Under the agreement, the parties will work toward approving the supplementary budget bill in a plenary parliamentary meeting by July 23 and host a related parliamentary speech by the Moon Jae-in administration Thursday.

Earlier this month, the government proposed an extra budget of 33 trillion won (US$29.2 billion) to fund another round of COVID-19 relief aid packages.

Including stimulus checks for people in the bottom 80 percent income bracket and financial assistance for smaller merchants ravaged by antivirus business restrictions, the upcoming 36 trillion-won virus relief packages will be financed by the extra budget, the second of its kind so far this year. 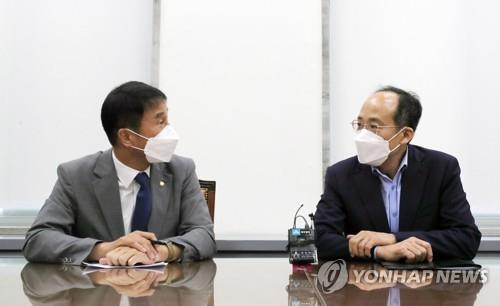