The Korea Disease Control and Prevention Agency (KDCA) said the expiring COVID-19 vaccine doses will arrive in the country early Wednesday and will be used for inoculation starting next week.

The COVID-19 vaccines under the swap deal will mostly be used to inoculate virus-vulnerable groups in the wider Seoul area that has recently become a hotbed of infections, the authorities said.

The KDCA said the country will return the same number of Pfizer vaccine doses from a future order to Israel later, possibly between September and November. 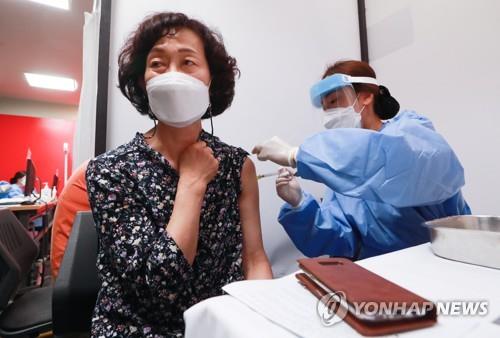 "Pfizer vaccines under the swap deal were used in Israel and there is no problem with quality," KDCA chief Jeong Eun-kyeong said, adding that the country is also considering vaccine swap deals with other countries.

Consultations with Israel on the deal proceeded in earnest in May when then Israeli Foreign Minister Gabi Ashkenazi visited Seoul for talks with Foreign Minister Chung Eui-yong, a source said.

"This exchange arrangement was made based on the thoughts shared by all countries, including South Korea and Israel, that even a single drop of a vaccine should not go down the drain," Choi Young-sam, ministry spokesman, told a regular press briefing.

South Korea has inoculated 30 percent of its 51.3 million population with at least one shot since late February, but it has faced some glitches in proceeding with the vaccination program due to tight supplies. The KDCA said 5.32 million people have been fully vaccinated, accounting for 10.5 percent of the population.

The country aims to achieve herd immunity by November with more than 70 percent of its population vaccinated.

The KDCA said it hopes to reach its November goal earlier than targeted with the increased vaccine rollout following the arrival of the Pfizer doses from Israel.

Separately, another 627,000 doses of the Pfizer vaccine under a direct contract with the pharmaceutical giant will arrive in the country Wednesday, it said.

South Korea has secured more than 100 million doses of vaccines.