Choi Kwang-soo, then chief of staff to interim President Choi Kyu-hah, revealed the decision when he met with U.S. Ambassador William Gleysteen on May 26, 1980, one day before the junta, led by then Gen. Chun Doo-hwan, sent troops to crack down on the uprising, according to the documents.

Chun seized power in a military coup after strongman President Park Chung-hee was assassinated by his spy chief the previous year. Chun ultimately rose to become president later in 1980 after the bloody crackdown on the Gwangju uprising.

His junta sent paratroopers and ruthlessly cracked down on civilians during the nine-day revolt. Official data put the death toll at over 200, with 1,800 others wounded, while critics argue that as many as 2,000 people were killed.

"Choi said that the majority of the military commanders, including cool-headed and responsible ones such as the martial law commander, had concluded that the situation could not be allowed to tear apart much further," a U.S. diplomatic cable read.

"Therefore, the local commander, Lt. Gen. Soh, had been given discretion to re-enter the city, notifying Seoul before actually doing so," he wrote, referring to So Joon-yeol, who was in charge of the local martial law troops.

Gleysteen also noted that he was told there were some officers who had favored notifying the civilian forces before launching the operations, but others thought that it would only intensify the resistance.

"As a result, military action might be unannounced in advance. In any event, everything possible would be done to minimize the loss of life," Gleysteen quoted Choi as saying.

In the meeting with Choi, Gleysteen also expressed Washington's concerns over growing anti-American sentiment in and around the Gwangju area, amid what he described as some "broadcasts" asserting that the U.S. was involved in the military crackdown.

"We had told that such crude efforts to shift the blame to U.S. were unacceptable, and if continued, would necessitate a firm U.S. denial," he said.

The documents were released by the State Department at Seoul's request for such diplomatic materials to be used as reference in a government-led probe into the bloody crackdown on the uprising.

Calls for uncovering the truth also came amid lingering allegations that the U.S. military might have acquiesced despite its operational control over the South Korean military. 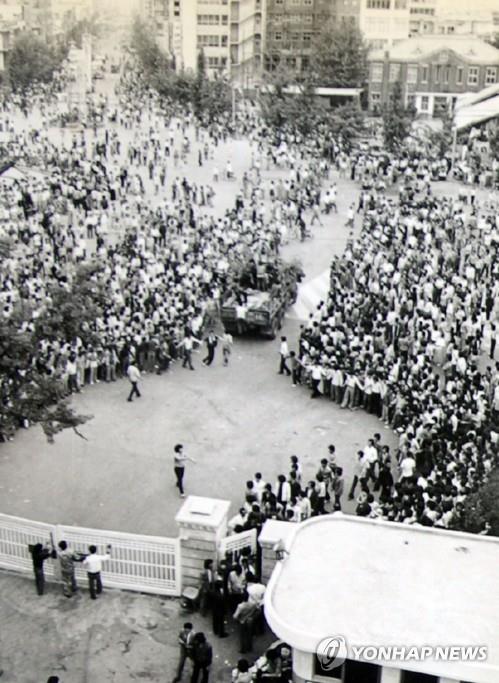