As of the end of June, the nation's registered population stood at 51,672,400, down 0.06 percent from 51,705,905 tallied at the end of March, according to census figures from the Ministry of Interior and Safety.

The latest census number marks the second consecutive quarterly drop since the 51,829,023 figure from the end of 2020, when the population fell for the first time on record.

The number of households increased to a record high of 23,256,332, up 0.43 percent from the end of March on the back of the growth of single-person households, which accounted for 39.7 percent of the total.

The size of households shrank to an average of 2.22 persons, compared with 2.23 during the first quarter.

The average age of registered nationals stood at 43.4 years, up 6.4 years from 2008 when the government began tracking the census data and up 1.3 years compared to 2018.

The average age of women was tallied at 44.6, higher than the 42.3 average for males.

The average age of those in the greater Seoul region stood at 43.8 years, 1.3 years younger than that of the average for other regions.

The ministry cited the growing concentration of the younger population towards Seoul and its vicinity, where jobs and infrastructure are better accessible, as a key factor behind the difference in average ages. 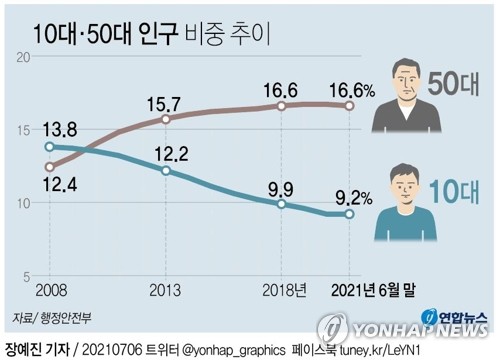