SEOUL, July 6 (Yonhap) -- A version of Minecraft, one of the world's bestselling video games, effectively became unavailable for purchase by teenagers in South Korea apparently due to technical complications stemming from the country's so-called Cinderella law that restricts kids from late night gaming.

Minecraft recently posted on its website that South Korean players face an age limit to buy Minecraft Java Edition, the original version of the game developed by Mojang Studios, which was purchased by Microsoft Corp. in 2014.

"For players in South Korea, you must be 19 years of age or older to purchase and play the Java edition of Minecraft," reads the website for the game, which is rated for ages 12 or older in the country. 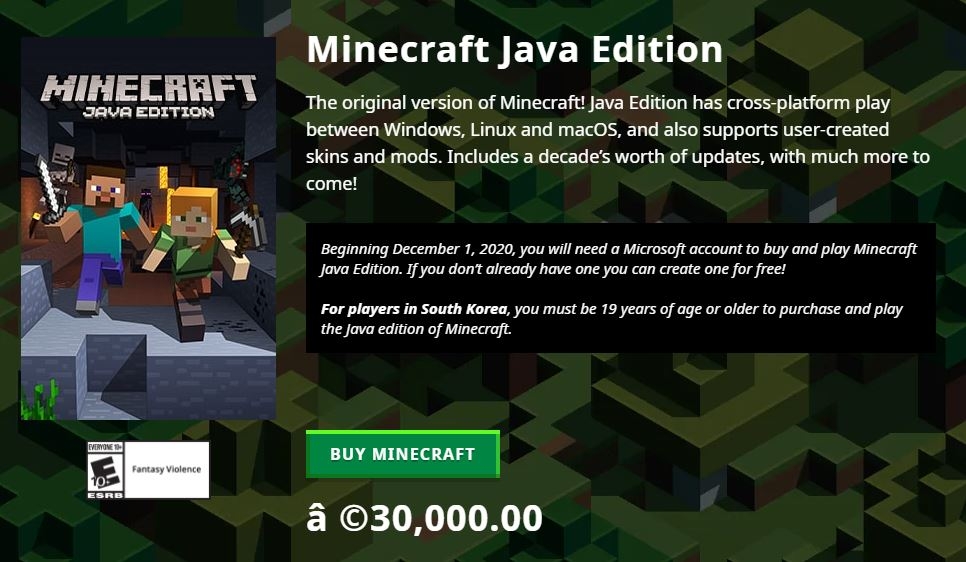 The move comes after the U.S. tech giant recently began migrating user accounts on the Java edition of the sandbox game to Microsoft accounts globally to improve the game's security and required new buyers of the version to have a Microsoft account.

The process has resulted in complications in South Korea as only adults can sign up for Microsoft's accounts.

South Korean law restricts those aged under 16 from playing PC video games from midnight to 6 a.m., which has forced video game operators to implement additional measures to follow the rules, popularly called the "Cinderella law" or "shutdown law" as children have to log off from PC gaming by midnight.

While most video game companies operate a system that follows the rules for children, Microsoft has apparently skipped the measures since 2012 and instead required its account users to verify that they are 19 or older.

The latest move has effectively created an age restriction on the game, which has sold 200 million copies globally since its launch in 2011 and is widely popular among children.

While existing Minecraft players have yet to face issues, problems will likely surface once Microsoft's account migration speeds up.

"We're working on a longer term solution for existing and new players under the age of 19 in South Korea and will have more to share on this later this year," said a Microsoft spokesperson in a statement.

The move has angered South Korean Minecraft gamers who are blaming the country's "Cinderella law."

A petition on the presidential office's website, which calls for an end to the law, has racked up over 67,000 signatures as of Tuesday afternoon since it was first posted on July 2.

"The shutdown system has ... diminished the rights of underage gamers and related industries, isolating the South Korean market and is merely a rule convenient for administrative purposes," the petition read. "The shutdown system must be completely abolished."

The law, first enacted in 2011 to curb late night gaming and help prevent gaming addiction among children, has stirred controversy over the years.

Critics of the law argue that many children already circumvent the rule by using overseas accounts or their parent's identification and that the rule demonizes gaming culture without fundamentally solving issues that it seeks to address, such as gaming addiction.

"The country views game only as an object to be regulated," said a local online Minecraft community in a statement. "(The regulators) should remove the regulations so apart from the global standard, and ought not to force Korean gamers to suffer cultural isolation because of unnecessary entry barriers."

Some lawmakers have taken action to amend the law.

Rep. Her Euna of the main opposition People Power Party submitted a bill Monday that seeks to abolish the mandatory shutdown rule and implement the gaming curfew on children only at their or their parent's request.