SEOUL, July 7 (Yonhap) -- The leaders of South Korea and the Netherlands agreed during virtual summit talks Wednesday to reinforce partnerships between their countries in the semiconductors industry and green energy field.

President Moon Jae-in of South Korea and Dutch Prime Minister Mark Rutte agreed to strengthen cooperation on the semiconductors supply chain, "recognizing each other as core partners in the field of semiconductors," according to their joint press statement.

The two countries aim to create a proactive partnership in the fields of renewable energy, hydrogen economy, solar and wind energy, smart agriculture, semiconductors and digital economy, the statement added. 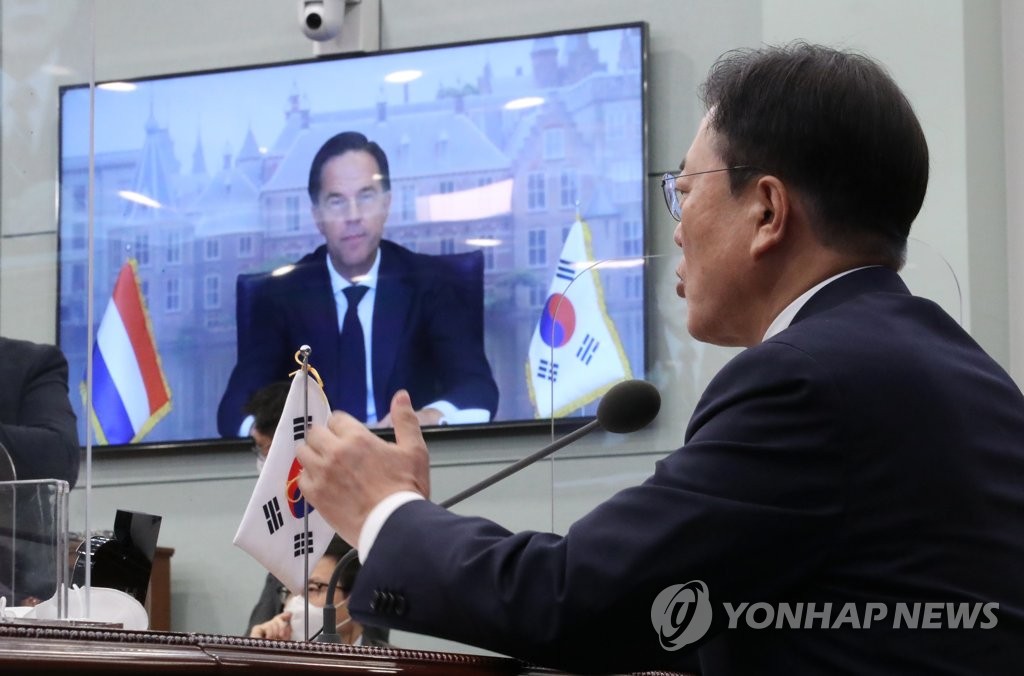 The Netherlands is a powerhouse in semiconductor equipment. It is home to ASML Holding, the world's sole manufacturer of extreme ultraviolet (EUV) lithography machines necessary for advanced chips. South Korea, which has Samsung Electronics and SK hynix, is a global leader in chipmaking.

"Both countries will strengthen their cooperation in the field of low carbon green economy and digital economic innovation," the statement read.

Moon and Rutte noted that the two countries are "natural partners" in tackling global challenges and underscored the importance of "universal, fair and rapid access" to vaccines, which is of vital importance to successfully overcome the COVID-19 pandemic.

They discussed the Korean Peninsula security situation. The Dutch leader affirmed his country's support for Seoul's efforts to engage with Pyongyang for peace and prosperity in the region.

Moon, meanwhile, requested that the Netherlands pay attention to the two-day U.N. ministerial conference on peacekeeping operation that is scheduled to open in Seoul from Dec. 7, Cheong Wa Dae said.

The Netherlands is the number one investor in South Korea among EU member states and its second-largest trade partner in Europe after Germany. Despite the coronavirus pandemic, two-way trade volume increased from US$8.4 billion in 2019 to $10.2 billion last year.

This year, the two sides commemorate the 60th anniversary of establishing their diplomatic ties. In 2016, they forged a "comprehensive future-oriented partnership."

Moon and Rutte had bilateral talks in Buenos Aires in December 2018 on the sidelines of the Group of 20 summit. They also met in South Korea's eastern county of Pyeongchang in February 2018, when the Dutch leader attended the opening ceremony of the Winter Olympics there. 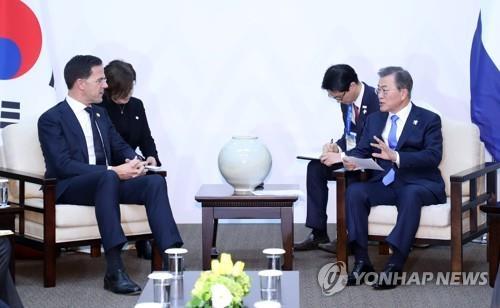