SEOUL, July 7 (Yonhap) -- South Korea's daily new virus cases spiked by the most since late December on Wednesday, fanning fears of a fourth wave of outbreaks over the summer.

Health authorities decided to extend current distancing curbs in the greater Seoul area for one week but warned of further tougher measures unless the current situation is brought under control. 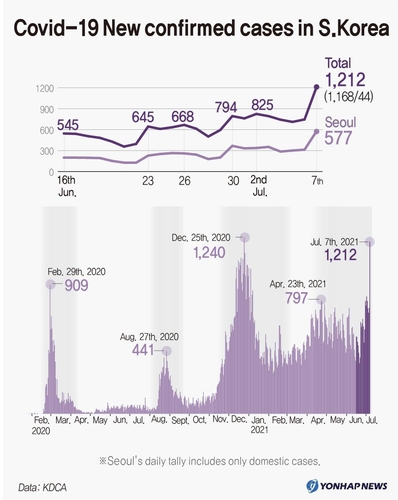 It marked the highest number since Dec. 25 last year, when a third wave of outbreaks peaked and the comparable figure was 1,240. Wednesday's figure is compared with 746 on Tuesday, 711 on Monday and 743 on Sunday.

The country added one more COVID-19 death, raising the death toll to 2,033.

Prime Minister Kim Boo-kyum said current social distancing rules, including a ban on private gatherings of five or more people and a 10 p.m. curfew on restaurants, in the greater Seoul area, will be maintained for one week.

With the nation struggling to control the latest wave of infections, health authorities decided to boost COVID-19 tests.

By the end of next week, health authorities will visit companies with more than 50 employees to get them tested, officials said. Gyeonggi Province plans to provide self-test kits to call centers, logistics firms and companies where foreigners are hired.

Makeshift testing centers will be set up at popular places for people in their 20s and 30s.

Companies in the greater Seoul area are strongly advised to avoid joining get-togethers or holding events. Public transportation services are advised to be reduced after 10 p.m. 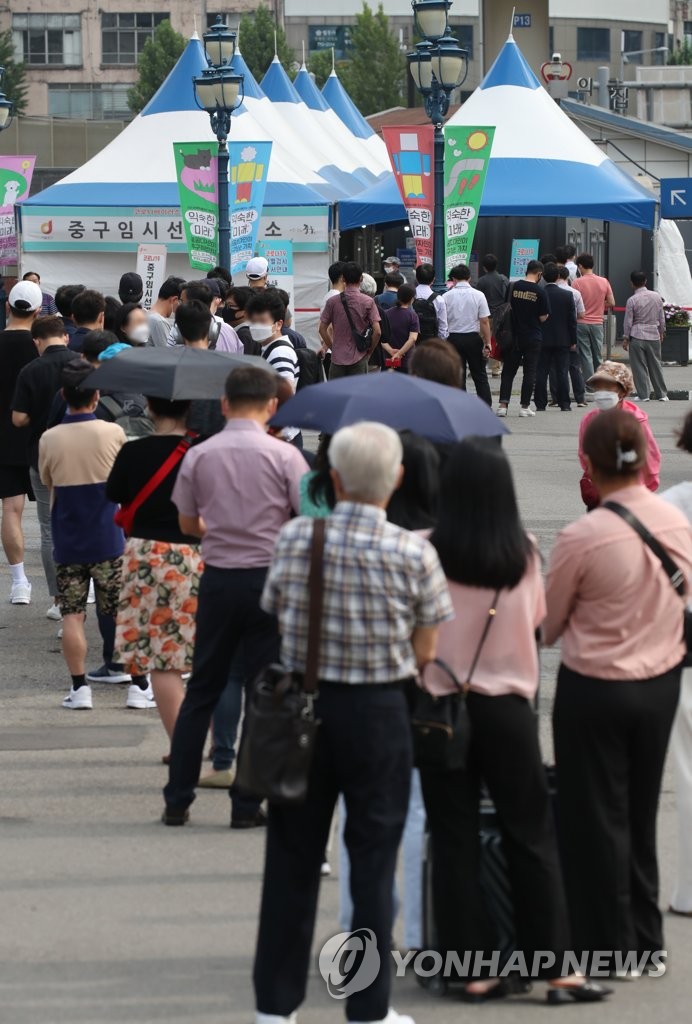 Cluster infections at a restaurant in Seoul's Mapo Ward and private English education centers in Gyeonggi Province have reported 326 confirmed patients and at least nine of them were infected with the delta variant, the KDCA said.

A total of 26 students and school officials have tested positive for COVID-19 at an elementary school in the western port city of Incheon.

At a restaurant in Seoul's Yeongdeungpo Ward, 18 people have tested positive, the KDCA said.

About 350,000 doses of Moderna vaccine will arrive in South Korea on Thursday, and the vaccine will go to people aged between 55 and 59, the KDCA said.

Of the newly confirmed domestic cases, 577 were from Seoul, 357 from the surrounding Gyeonggi Province and 56 from Incheon.

There were 44 additional imported cases, with 35 of them from Asian nations.

The total number of people released from quarantine after making full recoveries was 151,500, up 740 from a day earlier.