SEOUL, July 7 (Yonhap) -- A total of 700,000 doses of the coronavirus vaccine by Pfizer Inc. under an exchange deal with Israel arrived in South Korea on Wednesday.

The expiring COVID-19 vaccines, enough for 350,000 people, arrived at Incheon International Airport, the country's main gateway, earlier in the day.

The Korea Disease Control and Prevention Agency (KDCA) said the country will return the same number of Pfizer vaccine doses from a future order to Israel later, possibly between September and November. 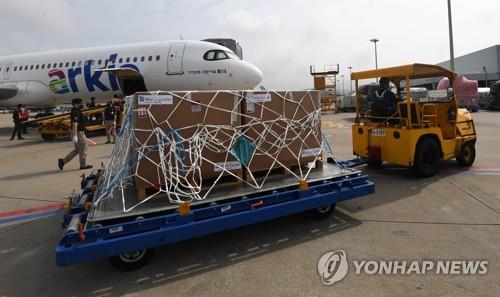 The COVID-19 vaccines under the swap deal will mostly be used to inoculate virus-vulnerable groups in the wider Seoul area that has recently become a hotbed of infections starting Tuesday, the authorities said.

The group includes around 340,000 people, including employees in industries that have a high degree of contact with large numbers of people, such as street cleaners and delivery workers, the KDCA said.

South Korea has inoculated more than 30 percent of its 51.3 million population with at least one shot since late February, but it has faced some glitches in proceeding with the vaccination program due to tight supplies.

The country aims to achieve herd immunity by November with more than 70 percent of its population vaccinated.

The KDCA said it hopes to reach its November goal earlier than targeted with the increased vaccine rollout following the arrival of the Pfizer doses from Israel.

South Korea has secured more than 100 million doses of vaccines.

The vaccine arrival came as the country's daily new virus cases spiked by the most since late December on Wednesday, fanning fears of a fourth wave of outbreaks over the summer.

Health authorities decided to extend current distancing curbs in the greater Seoul area for one week but warned of further tougher measures unless the current situation is brought under control.