(ATTN: CLARIFIES content of May and June rallies in paras 1-2; CHANGES headline)

SEOUL, July 7 (Yonhap) -- The head of South Korea's largest labor umbrella group was summoned by police on Wednesday for questioning over alleged illegalities during rallies that took place in Seoul between May and June amid COVID-19-related warnings by health authorities.

According to officials at Seoul's Yeongdeungpo Police Station, Yang Kyung-soo, chairman of the Korean Confederation of Trade Unions (KCTU), was grilled as a suspect for about four hours, beginning at 10 a.m., in connection with alleged violations of the assembly and infectious disease prevention laws during several workers' rallies over the past two months. 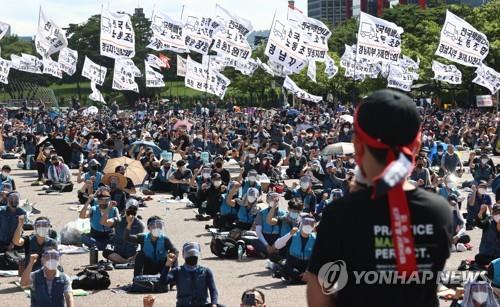 Many KCTU-affiliated workers attending the four rallies were accused of engaging in physical clashes with riot police and violating the rally attendance caps permitted by quarantine authorities.

Last Saturday's rally, which brought together an estimated 8,000 KCTU members in the central Seoul district of Jongno to demand better working conditions and a higher minimum wage, was not included in the questioning of Yang, police officials said. A 52-member police team has reportedly been investigating possible quarantine violations by the Saturday rally participants.