SEOUL, July 7 (Yonhap) -- The ruling Democratic Party (DP) is pushing for a bill aimed at dramatically increasing the media's burden of responsibility for false or fake news, sources said Wednesday.

According to the political sources, a subcommittee of the parliamentary Culture, Sports and Tourism Committee on Tuesday tabled a bill to revise the Act on Press Arbitration and Remedies, Etc. for Damage Caused by Press Reports, at the initiative of the ruling party.

The subcommittee meeting, however, ended shortly, without further processing the bill, amid opposition lawmakers' protests.

The revision proposal primarily aims to multiply the level of punitive compensation for damage from the release of "deliberate" or "grossly negligent" false news reports by up to five-fold.

It also seeks to codify a rule that would require news outlets responsible for fake or false reports to publish corrections on the front page of their newspapers, websites or at the very beginning of news broadcasting programs.

The DP is reportedly seeking to advance the bill through the National Assembly's plenary meeting by the end of this month, but the prospect of the bill's final passage remains uncertain amid the opposition's ongoing protests. The opposition bloc is denouncing the legislative push as an attempt to "gag the press."

According to details of the controversial bill, fake or false news reporting is defined as acts of publishing or mediating reporting of falsehood or information that is fabricated to look like facts.

Under the proposal, the compensation for property damage, infringement of personal rights or mental anguish caused by fake or false news that are intentional or caused by serious negligence by a news provider will go up by five times the current level.

DP lawmaker Park Jeung, who leads the subcommittee in charge of reviewing legislative proposals, plans to convene another meeting Tuesday to process the bill, but the move is likely to run into objection by the main opposition People Power Party (PPP).

Rep. Choi Hyung-du of the PPP, a member of the parliamentary culture committee, slammed the bill as "a retrogressive revision that could muzzle the media and (compromise) its freedom." 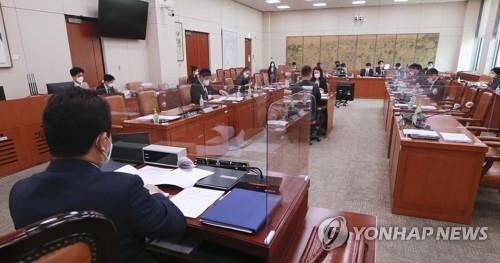