"An investigation is underway after receiving a damage report from the Atomic Energy Research Institute on June 1. ... It was exposed (possibly) to North Korea for about 12 days," Rep. Ha Tae-keung, a member of the parliamentary intelligence committee, told reporters, citing a briefing from the National Intelligence Service (NIS).

"It is presumed to have been done by North Korea," other officials also said, adding, "No core technology data was leaked."

According to Ha and another committee member, Rep. Kim Byung-kee, the country's damage caused by hacking groups backed by national entities rose by 9 percent in the first half of the year from the second half of last year.

Ha said there were also signs showing the Korea Aerospace Industries, South Korea's sole aircraft manufacturer, may have been hacked, and currently an investigation is under way to evaluate how long it was exposed. A North Korea-affiliated organization was presumed to be behind the possible attack, he said.

Referring to the physical condition of North Korean leader Kim Jong-un, the NIS said Kim is reigning the country "normally" after losing about 10 to 20 kilograms recently.

The NIS sees "there's no problem with his health," Ha said. 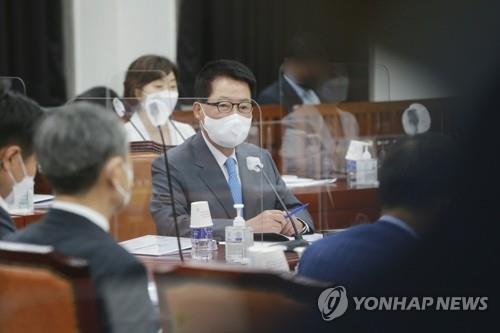 According to details of the parliamentary briefing by the NIS, Ri Pyong-chol, a North Korean party secretary, is believed to have been dismissed as a member of the Workers' Party of Korea's Presidium and demoted to the position as the head of the Machine-Building Industry Department in a recent reshuffle.

"No AstraZeneca vaccines are being brought in, not to mention any signs of purchasing other vaccines," Kim said.

"Completely ruling out expectations for vaccines, the country is urging thorough disease prevention efforts," he noted, adding that Pyongyang is keeping a new ambassador from China and other diplomats from entering the country out of infection fears

Compared with 2019, North Korea's total trade volume shrank to a quarter of the previous level in the wake of the pandemic, according to the NIS.

In the aftermath, the prices of condiments, including sugar, and medicine spiked by fivefold and tenfold, respectively, the national spy agency said.

"Amid price rises, the prices of rice and corn were capped at 4,000 and 2,000 (North Korean) won per kg, and an announcement was made, warning of death by firing if (the produce) is sold at a higher price," Ha noted.