SEOUL, July 8 (Yonhap) -- Campaign pledges to abolish the gender equality ministry by two presidential contenders of the main opposition party are sparking a major backlash from in and outside the party.

Former four-term lawmaker Yoo Seong-min and three-term lawmaker Ha Tae-keung, both competing to win the People Power Party (PPP)'s ticket to run in the March 9 presidential election, pledged to dissolve the Ministry of Gender Equality and Family earlier this week as part of their campaign promises.

Posting a message on his social media account Tuesday, Yoo said, "There's no reason to maintain a separate ministry on gender equality and family when half of the population are female and all the other government ministries are (already) related with women's issues."

Yoo also argued the gender ministry is failing to deliver on its duty of protecting women's rights, pledging to install a presidential committee on gender equality in place of the gender minister if he is elected president. 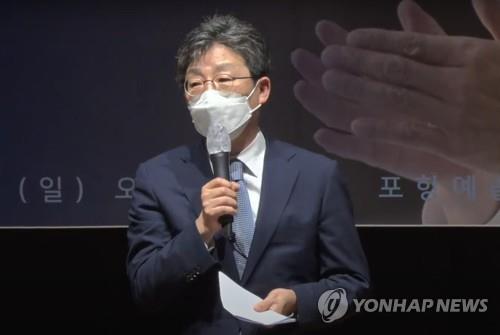 He also said any leftover budget incurred by the ministry's abolishment will be spent on adopting the so-called GI bill benefiting young people who completed their military service.

On the same day, Ha followed suit, saying during a public event, "The gender ministry has in fact become an organ that rather instigates gender-related tension." 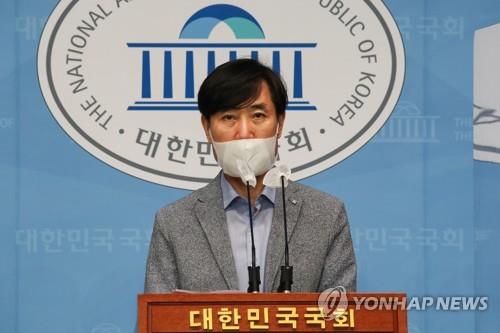 There is nothing new with the controversy over the necessity of the ministry dedicated to establishing affirmative action policies for women and preventing and handling sexual crimes against women.

Since its launch in 2001 at the initiative of the liberal President Kim Dae-jung amid calls for enhanced women's rights, the ministry has often drawn the ire of some people, especially young men, for controversial policies, such as the "shutdown law," aimed at forbidding children under the age of 16 from online games from midnight to 6 a.m.

This time, the pledges immediately touched off backlash from not only rival parties but also from inside the PPP itself even before drawing wider attention from people.

Noting that the ministry has played an instrumental role in leveling society's "sloping playing field" for women despite its small budget and limited power, opponents say the controversial pledges could compromise efforts for gender equality and only fan conflict between genders. 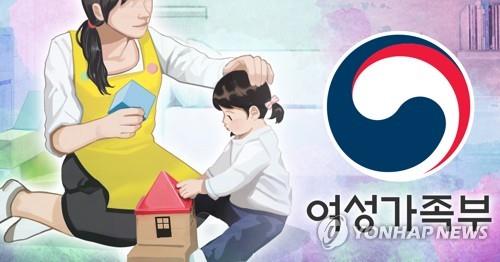 Rep. Lee Nak-yon, one of the presidential hopefuls in the ruling Democratic Party (DP), wrote on his Facebook account, "I think readjusting the role of the gender ministry is necessary, but calling for its entire abolishment is not right."

He said, "I am concerned if (the pledges) have any populistic intention to capitalize on (the growing sentiment of) hate toward a particular gender."

Another DP lawmaker, Jang Kyung-tae, accused the two PPP lawmakers of "neglecting the value of attaining gender equality and instigating conflict between genders."

"Calling for equal opportunities is (not the path to) equality at a time when the starting point (for each gender) is still different," he wrote on his Facebook account.

Many critics also pointed out that with the latest campaigns, Yoo and Ha may be seeking to enlist the backing of young male voters in their 20s and 30s, seen as the major force behind the sensational election of the 36-year-old Lee Jun-seok as chairman of the PPP last month. As a pledge for his party leadership bid, Lee promised to abolish a quota system favoring female candidates in the party's nomination process.

"It's an eyesore that senior (PPP) members joined forces after Chairman Lee enjoyed himself taking advantage of (the phenomenon of) gender conflicts among young people," Rep. Jang Hye-young of the minor progressive Justice Party wrote on her social media account.

Jeju Gov. Won Hee-ryong, a PPP presidential hopeful, made clear his objection to the policy proposal. "I am opposed to the idea of the abolishment pursued in a way that fuels tension between genders."

Rep. Cho Su-jin, a member of the PPP's supreme council, also wrote on her social media account that "bringing up the participation of women, even through artificial means, is in the realm of politics ... It is an impending (political) task to expand the ratio of female ministers and heads of municipalities to a certain extent."

"Our ministry is always doing our best for those who need our help ... (victims of sexual abuse or domestic violence) would be able to find nowhere but the gender ministry to seek help," Kim told reporters Wednesday. 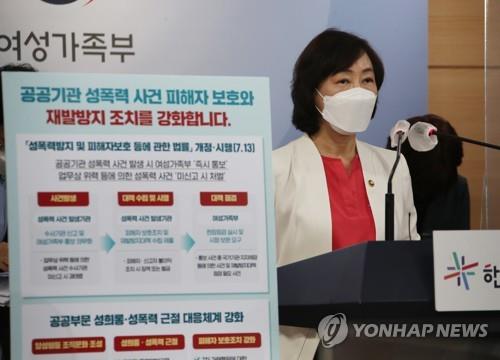