In the messages to celebrate the 1961 signing of the "DPRK-China Treaty of Friendship, Cooperation and Mutual Assistance," Kim also said the international situation has been "unprecedentedly complicated" in recent years while Xi said the world is undergoing "a great and rapid change unprecedented in 100 years."

"Despite the unprecedentedly complicated international situation in recent years, the comradely trust and militant friendship between the DPRK and China get stronger day by day and the traditional DPRK-China friendship has, gaining momentum, comprehensively developed onto a higher stage in all fields," Kim was quoted as saying.

He stressed that the treaty is showing "stronger vitality" in ensuring peace in Asia and the rest of the world as "hostile forces" have become more desperate in their obstructive moves.

"It is the fixed stand of the WPK and the DPRK government to ceaselessly develop the friendly and cooperative relations between the DPRK and China as required by the new times and as desired by the peoples of the two countries," he added.

DPRK is the acronym of the North's official name, the Democratic People's Republic of Korea. WPK refers to the North's ruling Workers' Party of Korea.

Xi also emphasized that the treaty signed in 1961 laid "important political and legal foundations for consolidating the militant friendship" between the two countries and hoped to strengthen his "strategic communication with Kim.

"Over the past six decades, the DPRK and China have written a proud history of friendship while invariably supporting and cooperating with each other morally and materially in the struggle for accomplishing their joint cause, sharing sweets and bitters in all tempests of history," he said, according to the KCNA.

"Noting that the world undergoes a great and rapid change unprecedented in 100 years, General Secretary Xi Jinping stressed in the message that he is willing to provide greater happiness to the two countries and the two peoples by strengthening the strategic communication with General Secretary Kim Jong-un," the KCNA added.

The Rodong Sinmun, the official newspaper of the ruling Workers' Party, also carried an editorial calling the bilateral cooperation a "powerful weapon" that enables them to win any anti-imperialist war and fight in defending socialism.

"As imperialists now have united and are plotting to isolate and crush socialist countries, it is required of North Korea and China to further develop their friendly relations based on the spirit and principles of the bilateral treaty," it said.

North Korea's foreign ministry on Sunday vowed to continue to strengthen and develop relations with Beijing.

"The DPRK and the PRC, firmly convinced of the justness of their socialist cause, are now staunchly advancing toward a bright future by smashing the high-handedness and desperate maneuvers of the hostile forces on the strength of militant friendship and blood ties even under the complicated international situation," the ministry said on its website.

The exchange of messages came about 10 days after Kim sent a congratulatory message to Xi to mark the 100th anniversary of the Communist Party of China, in which he vowed to elevate relations with China to a new strategic point.

Last month, China's ambassador in Pyongyang and North Korea's top diplomat in Beijing stressed the importance of bilateral relations in rare op-ed pieces published in state media of the host country on the second anniversary of Xi's trip to Pyongyang.

The two countries signed the treaty on July 11, 1961, under which they are obliged to provide military and other assistance to each other, a deal seen as the bedrock of their strong alliance for decades. 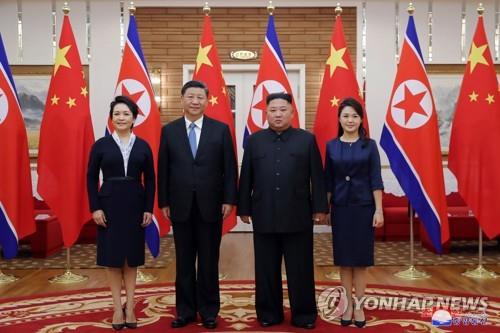