SEOUL, July 11 (Yonhap) -- New orders won by South Korean shipbuilders hit a 13-year high in the first half of the year amid signs of a modest recovery in global trade from the COVID-19 pandemic, data showed Sunday.

Korean shipbuilders led by Hyundai Heavy Industries Co. won new orders worth US$26.7 billion that amounted to 10.88 million compensated gross tons (CGTs) in the January-June, according to the data provided by the Ministry of Trade, Industry and Energy.

Compared with a year ago, new orders skyrocketed 724 percent.

It marked the biggest amount of orders since 2008, when the shipbuilding industry boomed before the global financial crisis.

Local shipbuilders' new orders accounted for 44 percent of the total global orders in the first half, the data showed.

In the first half, Korean shipbuilders won orders for 16 LNG carriers.

With global demand for cargo ships increasing, Korean shipbuilders received orders for 81 large container carriers, according to the data. 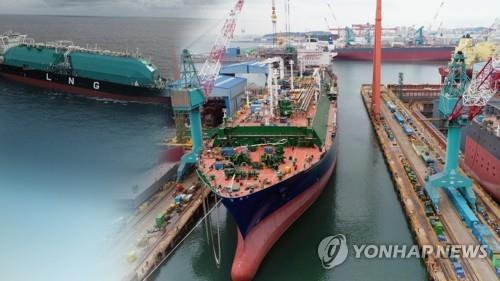