SEOUL, July 12 (Yonhap) -- South Korea's daily new coronavirus cases rose by more than 1,000 for the sixth consecutive day Monday despite fewer tests over the weekend, as the greater Seoul area, the hotbed for the recent spike in new infections, is placed under the toughest social distancing measures.

The country added 1,100 new COVID-19 cases, including 1,063 local infections, raising the total caseload to 169,146, according to the Korea Disease Control and Prevention Agency (KDCA). The tally compares with 1,324 tallied the previous day.

The country added one more COVID-19 death, raising the death toll to 2,044. The fatality rate came to 1.21 percent.

Over the past week, the average number of daily cases came to 992, up 51.5 percent from a week earlier. 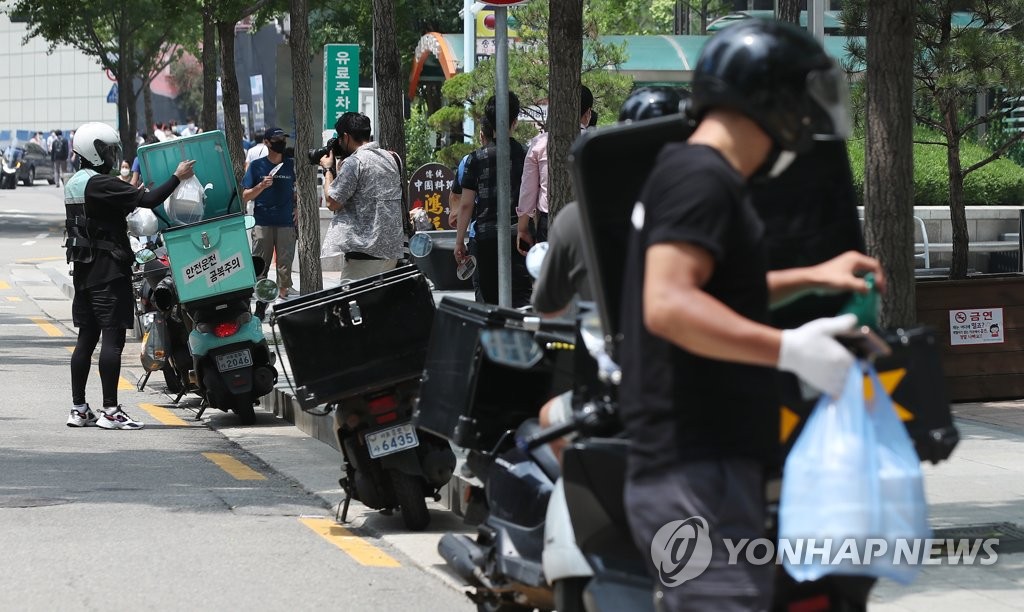 As of 9 p.m. Monday, the health authorities and local governments reported 1,007 new cases for the day, down 13 from the same time Sunday. Daily cases are counted until midnight and announced the following morning.

Starting Monday, the highest level of social distancing is being put in place for Seoul and the surrounding Gyeonggi Province, which will run for two weeks.

For the past days, around 80 percent of the daily infections have been reported in the wider Seoul area, home to half of the country's 51.3 million population, but non-Seoul areas, such as Busan, have seen a steady rise in new infections.

Among other restrictions, gatherings of more than two people are banned after 6 p.m., which is the strictest measure ever imposed by the country since it first reported a COVID-19 case in January 2020. Meetings of up to four people are allowed during the daytime.

The country had banned gatherings of more than four people for several months nationwide before lifting the restrictions for areas outside Seoul earlier this month.

Entertainment establishments, including night clubs and bars, are ordered to shut down in the capital area as well, while restaurants are allowed to have dine-in customers only until 10 p.m.

Weddings and funerals can only be attended by relatives, and demonstrations are restricted. The speed of treadmills at gyms must be kept at 6 kph or below.

Authorities warned that South Korea may report more than 2,000 daily cases later this month amid a spike in variant strains of COVID-19.

The KDCA warned that the daily COVID-19 cases may rise to the mid-2,000s in mid August if the current pace is maintained, but will drop to below 1,000 in late August if the resurgence is brought under control.

The number may further drop to 600s in late August if the current wave of the pandemic is tightly controlled, the authorities estimated.

The KDCA said over the first week of July, around 26.5 percent of newly added patients in the capital area were infected with the more contagious delta variant, soaring from just 2.8 percent tallied a month earlier. 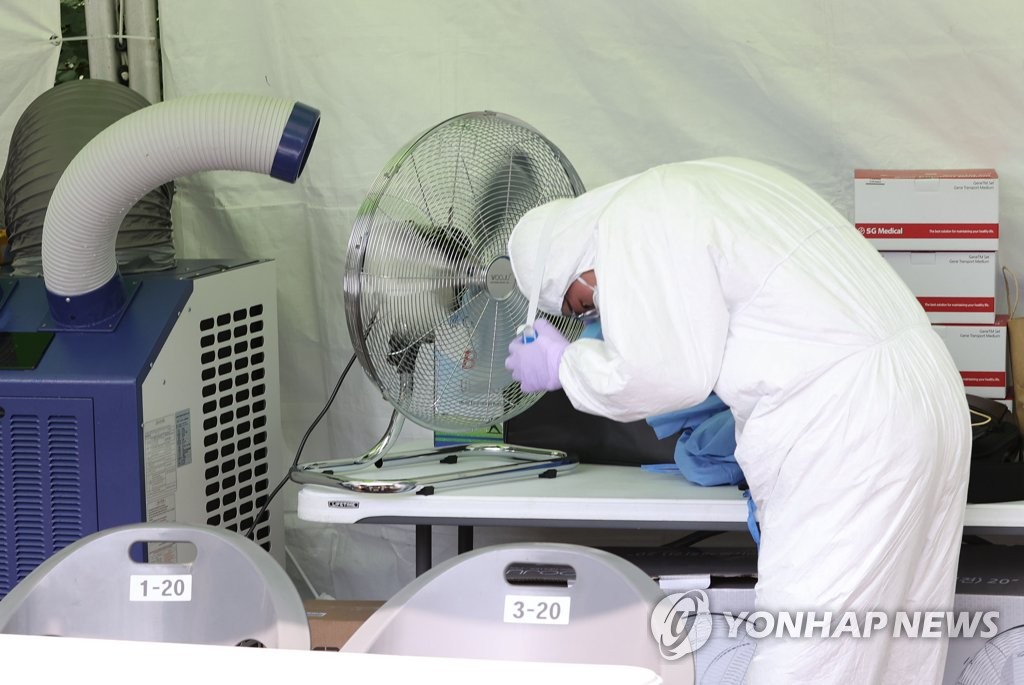 While other regions are still under Level 1 in principle, some cities and provinces are also raising the levels of their own virus curbs in the face of an increase in new infections. The portion of daily cases outside the greater Seoul area reached 27.1 percent Monday, up from 22.7 percent on Saturday and 24.7 percent on Sunday.

The southeastern port city of Busan, which adopted Level 2 social distancing last week, decided to apply stricter measures, including banning gatherings of more than four people after 6 p.m. Bars and karaoke businesses can also operate only until 10 p.m. in the city.

The central city of Daejeon and South Chungcheong Province also raised the levels of their virus restriction to Level 2 as well.

The country's inoculation program, meanwhile, has been slow over recent weeks. A total of 15.5 million people, or 30.4 percent of the country's population, have received their first shots of COVID-19 vaccines, remaining almost unchanged from 29.8 percent tallied at end-June.

The KDCA said 5.8 million people have been fully vaccinated, accounting for 11.4 percent of the population.

The country, which opened vaccine reservations for those aged from 55 to 59 on Monday, stopped receiving additional reservations due to the lack of jabs. Health authorities said they currently have 3.1 million doses of COVID-19 vaccines in stock.

Since the country began vaccinations on Feb. 26, a total of 402 deaths after vaccinations have been reported, while 95 percent of the 101,331 cases of side effects reported have been found to be mild symptoms. 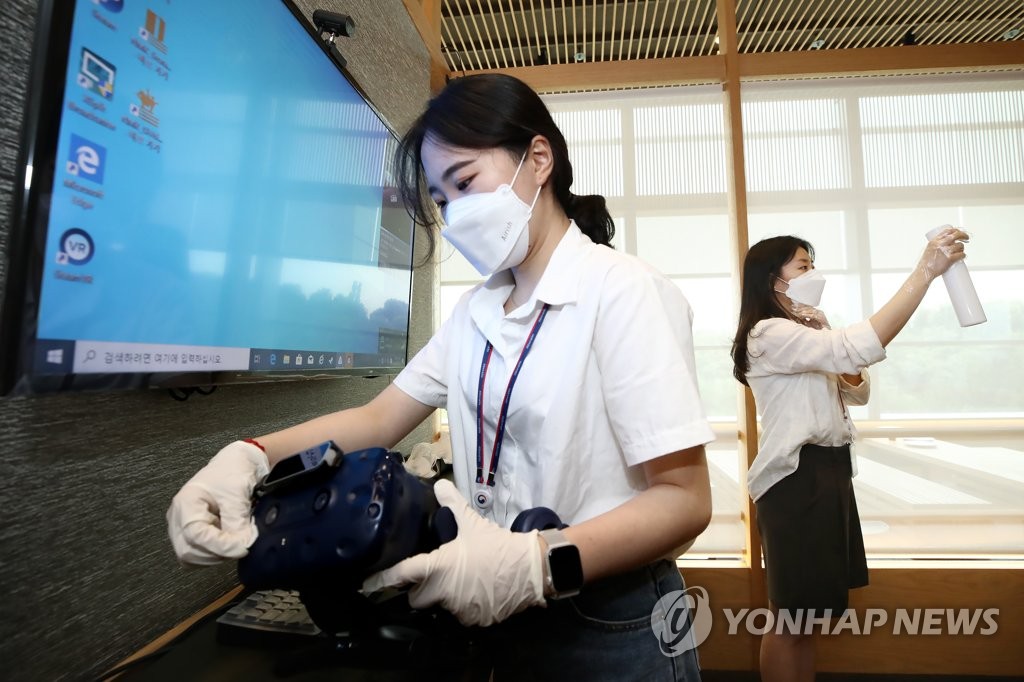 Of the newly confirmed domestic cases, 402 were from Seoul, 322 from the surrounding Gyeonggi Province and 51 from the western port city of Incheon.

There were 37 additional imported cases.

By country, Indonesia accounted for 14 cases, followed by the Philippines with four patients.

The total number of people released from quarantine after making full recoveries was 154,187, up 427 from a day earlier. This indicates 91.16 percent of the patients reported here being cured.

The number of patients in critical condition came to 138, down seven from the previous day.