The crash of the private plane carrying the two victims occurred around 3:09 p.m. in a remote village of Euiryeong, 396 kilometers southeast of Seoul, they said. 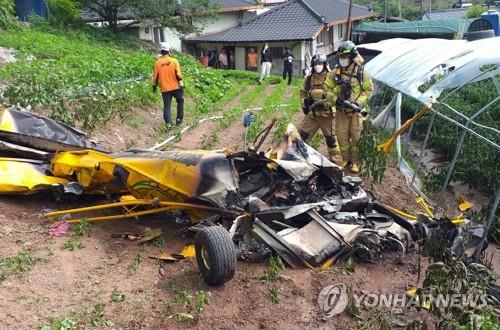 The two deceased were identified as a 53-year-old captain surnamed Oh and a 44-year-old co-pilot surnamed Hong, both of whom belong to a private aviation company based in nearby Haman.

No one on the ground was injured or killed.

The plane reportedly took off from an airfield in Haman around 3 p.m.

The take-off location and the crash site are about two kilometers apart in a straight line. The ill-fated aircraft is known as the CH701 produced in the United States in 2008.

Police said they are investigating the cause of the accident.