SEOUL, July 15 (Yonhap) -- Nearly half of South Korean adults are in favor of some opposition lawmakers' proposals to abolish the Ministry of Gender Equality and Family, a poll showed Thursday.

In the poll of 1,016 people nationwide over the age of 18, 48 percent said they agree with the proposed dissolution of the gender ministry. 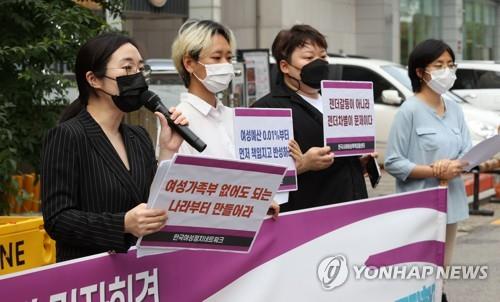 The poll jointly conducted from Monday to Wednesday by four Seoul-based pollsters -- Embrain Public, KSTAT Research, Korea Research International and Hankook Research -- has a margin of error of plus or minus 3.1 percentage points with a 95 percent confidence level.

Earlier this month, Chairman Lee Jun-seok of the main opposition People Power Party and some of the party's presidential hopefuls called for the abolition of the gender ministry, saying the ministry has outlived its lifespan as a special missions ministry or had no roles from the outset.

But Minister of Gender Equality and Family Chung Young-ai and the ruling Democratic Party opposed the proposal, saying the ministry still has more work to do to reduce gender discrimination and violence against socially vulnerable groups.

The gender ministry was established in early 2001 as a campaign pledge of the Kim Dae-jung administration. It is in charge of planning gender-related policies, such as expanding women's social participation, preventing domestic and sexual violence and protecting victims.

Nearly half of adults support abolition of gender ministry

Nearly half of adults support abolition of gender ministry