SEOUL, July 16 (Yonhap) -- The alternative holiday bill passed by the National Assembly last month will be newly applied only to national holidays, the government said Friday.

Public holidays, like Buddha's Birthday and Christmas, will be excluded from alternative holidays, the Ministry of Personnel Management said.

The Assembly approved legislation on June 29 to increase alternative statutory holidays by designating a substitute holiday for all public holidays that fall on weekends. But the bill delegates the actual designation of alternative holidays to the presidential decree for its flexible enforcement. 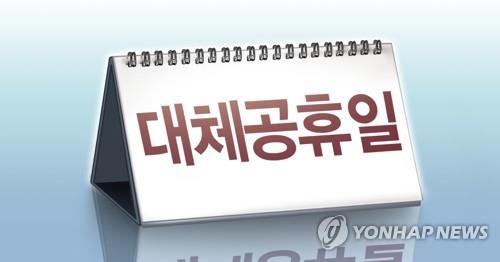 Previously, alternative statutory holidays were allowed only for the Chuseok fall harvest holiday, Lunar New Year's Day and Children's Day in May in the case they happen to coincide with weekends.

The ministry said the government has decided to exclude public holidays in consideration of extra burdens on the management of small and medium-sized businesses and other concerned parties.

The Korea Federation of Small and Medium Business has warned that the planned expansion of alternative statutory holidays will disrupt corporate production due to lack of working hours and lead to rapid increase in labor costs.

The substitute holiday bill has been promoted by the ruling Democratic Party as part of efforts to reduce South Koreans' working hours, known as the second longest in the Organization for Economic Cooperation and Development bloc, and boost domestic consumption. However, the new bill will not be applied to workplaces with fewer than five employees, which are not required by law to give paid leave.

Buddha's Birthday, Christmas to be excluded from alternative holidays

Buddha's Birthday, Christmas to be excluded from alternative holidays