SEOUL, July 18 (Yonhap) -- Renault Samsung Motors Corp. will temporarily suspend production at its plant in the southeastern port city of Busan due to shortages of chips for vehicles, the company said Sunday.

The South Korean unit of Renault S.A. will close down its plant in Busan, 453 kilometers southeast of Seoul, on Monday for two days, it said.

It will be the first time that the Renault Samsung plant has been shut down due to chip shortages, though rivals Hyundai Motor Co., Kia Corp. and GM Korea Co. have suspended or decreased their production this year.

"The production suspension was attributable to the fallout of prolonged global chip shortages," a company official said. 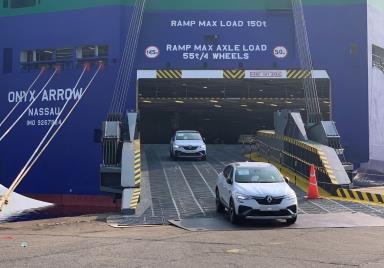 In a bid not to hinder the strong sales of its XM3 SUVs in the European market, the labor and management are expected to speed up negotiations over a wage deal when the Busan plant resumes production Wednesday, industry sources said.

All XM3 SUVs sold across the world, except in Russia, are produced at the Busan plant.

According to data announced by Renault Group on Friday, about 20,000 units of the XM3 SUVs were sold in 28 European countries, including France, from March to June.