The Rodong Sinmun, an organ of the North's ruling Worker's Party, made the appeal in an article, saying, "The ideological and cultural penetration under the colorful colored signboard of the bourgeoisie is even more dangerous than enemies who are taking guns."

The newspaper highlighted the superiority of its standard language based on the Pyongyang dialect and stressed the need for the younger people to use it correctly, as well as maintain acceptable lifestyles in terms of attire, haircuts, music and dance.

"When the new generations have a sound sense of ideology and revolutionary spirits, the future of a country is bright. If not, decades-long social systems and revolution will be perished. That is the lesson of blood in the history of the world's socialist movement," the article read.

North Korea has recently toughened the crackdown on the speaking habits of its millennials, who have been mimicking South Koreans, banning them from, for example, calling one's husband "oppa," which means "older brother" but often refers to a spouse or a boyfriend in South Korea, according to the South's National Intelligence Agency.

The regime has called for stronger discipline and ideological education particularly for young citizens, as it is under growing pressure from the fallout of global sanctions and the coronavirus pandemic.

In December, the North reenacted a law that toughens the punishment for possession of videos made in South Korea as part of efforts to prevent the inflow of outside culture that could influence its people's ideology. 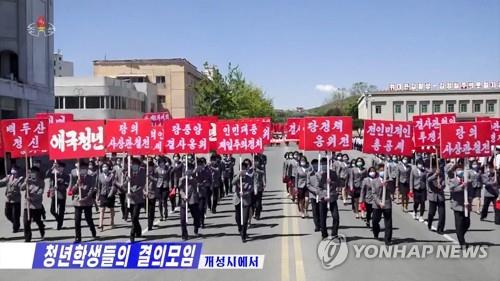