"Currently, the two countries are in consultations (on the issue), but it is still insufficient" in terms of accomplishments expected, a senior Cheong Wa Dae official said in a written statement.

It is "uncertain whether (Moon's) visit to Japan and summit talks will take place," the official added on the customary condition of anonymity.

The official cited an "obstacle" that has emerged in the last phase of preparatory talks, apparently referring to inappropriate comments made by a high-level Japanese diplomat here against Moon. 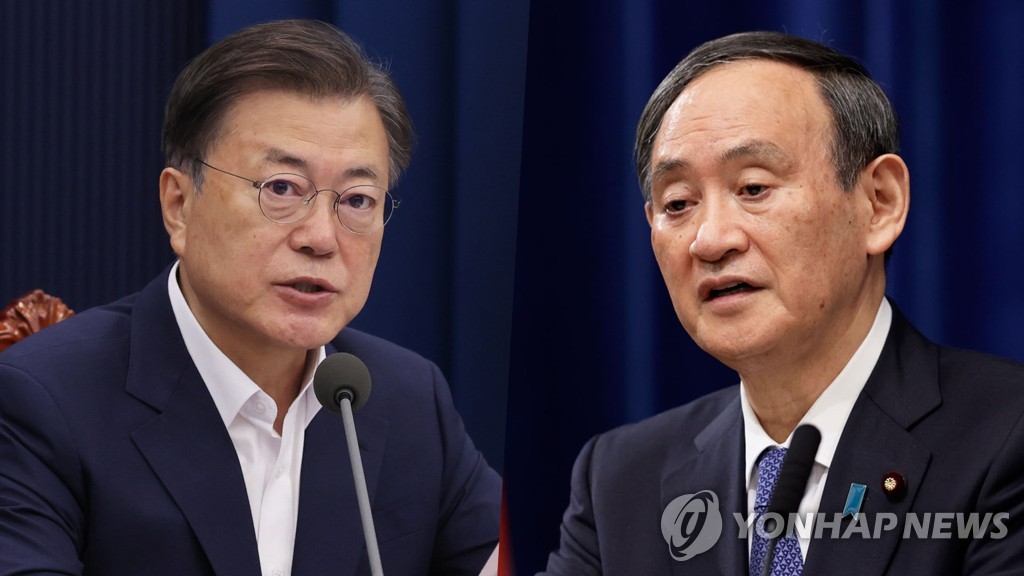 The Cheong Wa Dae official said there has been "no convincing measure" from Japan in connection with the problem.

Earlier Monday, the Yomiuri Shimbun reported that Moon plans to attend the Olympic event slated for Friday and hold his first face-to-face summit with Prime Minister Yoshihide Suga on the occasion.

Park Soo-hyun, senior Cheong Wa Dae secretary for public communication, immediately said, "No decision has been made yet."

The president is "trying to take a better path than an easy one" when it comes to the Seoul-Tokyo relations, he stressed.

Opinion polls show that many South Koreans are opposed to Moon making a trip to Tokyo to attend the ceremony slated for Friday.

"We are well aware of the negative public sentiment against (Moon's) visit to Japan," Park said. "Following such a public opinion is an easy choice, but (Moon) also needs to think about taking a lonely path as president."

Cheong Wa Dae has openly set a guarantee of making "accomplishments" in summit talks a precondition for Moon's possible trip to Japan. Seoul is seeking a resolution to longstanding disputes over shared history and Tokyo's unilateral export curbs launched in 2019.

Relations between the neighboring countries have remained at a low point due primarily to the thorny issue of compensating Korean victims of forced labor and sexual enslavement by Japan during its colonial rule from 1910-45.

U.S. President Joe Biden's administration has been pushing to bring the two Asian allies closer for stronger trilateral cooperation in the region.

The Yomiuri, meanwhile, reported that the Japanese government has decided to dismiss Soma. Cheong Wa Dae's latest statement indicates that Tokyo has yet to inform Seoul of the decision, if true.