SEOUL, July 20 (Yonhap) -- The CEO of the scandal-ridden private equity investment firm, Optimus Asset Management, was sentenced to 25 years in prison Tuesday for running one of the largest fund fraud schemes in the country's financial history.

The Seoul Central District Court found Kim Jae-hyun guilty of fraud and embezzlement in the fraudulent fund case but imposed a prison term significantly below the life imprisonment sought by prosecutors against Kim.

Both Lee Dong-yeol, the company's second-largest shareholder, and Yoon Seok-ho, an executive at the company, were sentenced to eight years in prison on the same charges.

Calling the case "massive fraud that disrupted the capital market, Judge Hur Sun-ah said Kim "totally ignored the basic work ethics and principles of the financial market, such as keeping faith with investors," and caused them "astronomical damage."

She also reprimanded Kim and the other defendants for going "as far as generating fraudulent documents for investors" in order to sustain the fraud, and impeding investigations by trying to destroy evidence.

"It is unclear how much money the victims can recover," she added. 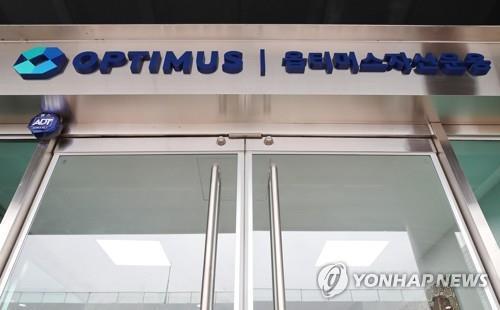 The vast fraud scheme run by the private equity company took in money of about 1.35 trillion won from approximately 3,200 individual and institutional investors from April 2018 to June 2020, by lying that the money would be invested in safe public institutions.

However, most of the money was actually funneled into risky assets or used to pay returns to investors to give the appearance that the company was engaged in serious and sound financial transactions, according to investigators.

The company failed to redeem more than 554 billion won for its customers.

The scandal has engulfed the country's political and financial sectors, after one of the company's internal documents was disclosed to media last year, suggesting that some influential figures allegedly lobbied to help the company conceal its fraudulent activities.

But investigations into various allegations have yet to produce meaningful outcomes, except that a former director at the Financial Supervisory Service (FSS) was charged with taking bribes in January.