As of 6 p.m, the country reported 1,442 new cases, sharply up from 987 from the same time the previous day and the highest ever for the time of day, according to the Korea Disease Control and Prevention Agency (KDCA).

The daily total, to be counted until midnight and announced early Wednesday, may breach the 1,700 mark. 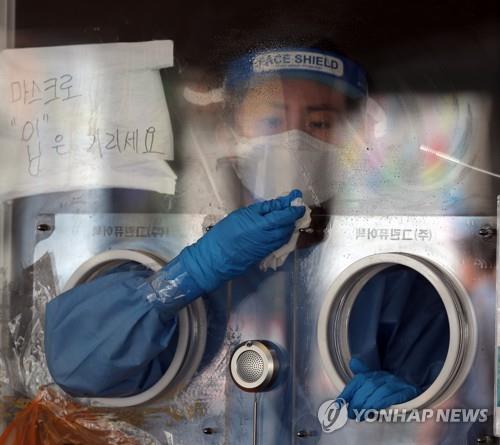 A total of 1,015 new cases were reported in the greater Seoul area, accounting for 70.4 percent of the total, with other parts of the country reporting 427 cases, the KDCA said.

The greater Seoul area, home to half of the country's 51.3 million population, has emerged as the virus hot spot due to continued infections in various settings, including schools, workplaces, restaurants, gyms, department stores and entertainment venues.

It is the first time for regions outside the capital area to report over 400 cases for the 6 p.m. tally, the authorities said.

The daily caseload has remained above the 1,000 mark over the past two weeks.

Health authorities expressed concerns over the fast spread of the more transmissible delta variant, which poses a greater challenge to antivirus efforts.

Health authorities earlier warned that the daily virus cases may rise to the mid-2,000s in mid-August, before falling to as low as the 600s by the end of next month, should the fourth wave of the pandemic be brought under control.

As new cases in the greater Seoul area account for 80 percent of the daily caseload, the country implemented a semi-lockdown in the region that centers on banning gatherings of more than two people after 6 p.m.

Under the highest social distancing measures of Level 4, entertainment establishments, including nightclubs and bars, are ordered to shut down in the capital area, while restaurants are allowed to have dine-in customers only until 10 p.m.