WASHINGTON, July 20 (Yonhap) -- U.S. Deputy Secretary of State Wendy Sherman stressed the importance of cooperation between the United States, Japan and South Korea in addressing various regional issues, including the denuclearization of the Korean Peninsula, the State Department said Tuesday.

The call for trilateral cooperation comes amid prolonged tension between the two U.S. allies over history issues. Sherman met Tuesday with her Japanese counterpart, Takeo Mori, in Tokyo.

"The deputy secretary and the vice foreign minister also highlighted the importance of U.S.-Japan-Republic of Korea (ROK) cooperation to meet the global challenges of the 21st century, including the complete denuclearization of the Korean Peninsula, combating COVID-19 and the climate crisis, and ensuring strong supply chains," the State Department said of the meeting, referring to South Korea by its official name. 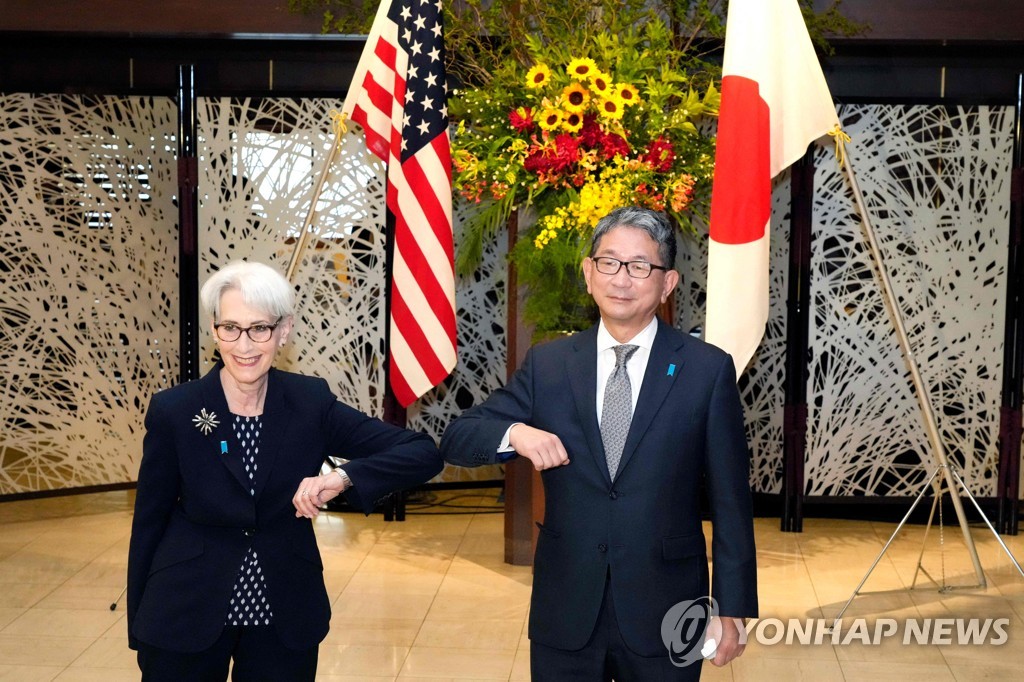 Sherman is on an eight-day trip to Asia that will later take her to South Korea and Mongolia.

Seoul-Tokyo relations have been at their lowest ebb since 2019 when Japan began taking trade and economic measures that were believed to be aimed at retaliating against Seoul court decisions in favor of South Koreans forced into sexual slavery or forced labor during Japan's 1910-45 colonial rule of Korea.

South Korean President Moon Jae-in was earlier expected to visit Japan during the Tokyo Olympic Games, set to start this Friday, for talks with Japanese Prime Minister Yoshihide Suga on ways to improve their countries' relationship.

Moon, however, scrapped his trip after a senior Japanese diplomat in Seoul made disparaging remarks about his efforts to improve ties with Japan.

The Sherman-Mori talks came before a trilateral meeting in Tokyo that will also involve their South Korean counterpart, Choi Jong-kun.

Choi is also expected to hold bilateral talks with his Japanese counterpart before he and Sherman head to Seoul on Wednesday.

A spokesman for the U.S. State Department reiterated the importance of what he called a "robust and effective" trilateral cooperation between the U.S. and its Asian allies.

"It is critical for our shared security and common interests in defending freedom and democracy, upholding human rights, championing women's empowerment, combating climate change, promoting regional and global peace and security and bolstering the rule of law in the Indo-Pacific region and across the globe," Ned Price said later in a department press briefing.

While refusing to directly comment on the latest hiccup in efforts to improve Seoul-Tokyo relations caused by the Japanese diplomat's disparaging remarks, the State Department spokesman emphasized the need for the two U.S. allies to overcome their history-related issues and work together on current problems.

"We have long encouraged the ROK and Japan to work together on history-related issues in a way that promotes healing and reconciliation," he said when asked if the United States recognized the problem of Korean women forced into sexual slavery.

"As we stated at the time in 2015, we welcome efforts such as the 2015 agreement between the two countries as an example of their commitment to forging a more productive and constructive bilateral relationship," he added. 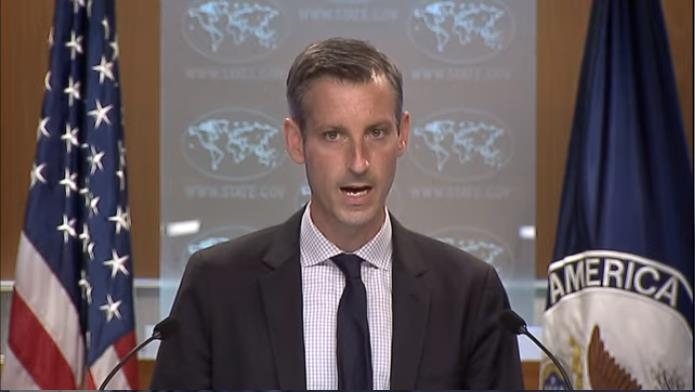 In the 2015 pact between South Korea and Japan, Seoul agreed to settle the sexual slavery issue once and for all, in exchange for 1 billion Japanese yen or some US$9.1 million.

However, in January, a Seoul district court ruled in favor of 12 former Korean sex slaves of the Japanese imperial army, noting state-level agreements, such as the 2015 agreement, do not override individual victims' rights to seek reparations.

"Even while addressing sensitive historical questions, cooperation on our common regional and international priorities must proceed," Price said.

Earlier reports suggested Sherman may add a visit to China to her currently three-nation Asia trip to discuss ways to advance efforts to denuclearize the Korean Peninsula.

The department spokesman said he had no updates on Sherman's ongoing trip but that his country will continue to explore opportunities to engage with officials from the People's Republic of China (PRC).

"We've been clear that when it comes to the PRC, we will engage when it's in our interests to do so, and we do remain interested in doing so in a practical, substantive and direct manner. That certainly remains the case," said Price.