The previous record was set last Thursday, when the maximum power demand in Asia's fourth-largest economy stood at 88.6 GW.

Wednesday's high power demand sent the country's reserve electricity to a stable level of 10GW, with its power reserve ratio coming to 12.1 percent.

Power authorities earlier expected the maximum power consumption to hit 91.4GW with the reserve electricty diving to 7GW. But the actual increase was less than expected as the temperature did not go as high as predicted.

The country's electricity consumption could hit a new high Thursday as the weather agency's forecast showed the maximum temperature may soar to 38 C. 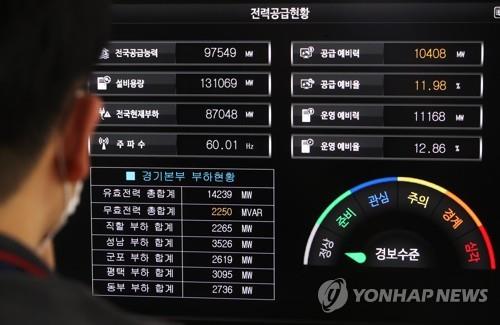 Power authorities said the country should have an electricity reserve of at least 10 GW to prepare for emergencies, with the reserve electricity ratio hovering above 10 percent.

South Korea activates emergency measures, including controls on the use of air conditioners at home, offices and plants, should its power reserves fall below 5.5 GW.

Officials said Tuesday the government is making all-out effort to ensure a stable supply of electricity amid the scorching heat wave following the annual rainy season.

The Ministry of Trade, Industry and Energy said it will likely resume operations of three nuclear reactors in the southeastern coast within this month, adding 3,100 megawatts (MW) to the country.

As part of efforts to cut the country's power consumption, the government has also advised all ministries and other public institutions to stop or refrain from using air conditioners between 2 p.m. and 5 p.m.
(END)