SEOUL, July 21 (Yonhap) -- Exports by South Korean small and medium-sized enterprises (SMEs) jumped nearly 22 percent to a new high in the first half of the year despite the coronavirus pandemic, government data showed Wednesday.

Local SMEs' overseas shipments came to US$56.5 billion in the January-June period, up 21.5 percent from a year earlier, according to the data from the Ministry of SMEs and Startups.

It marks the highest half-year amount since related data tracking began in 2010. The previous record was the $54.2 billion recorded in the latter half of 2020.

South Korean SMEs' exports have been expanding on-month since November. 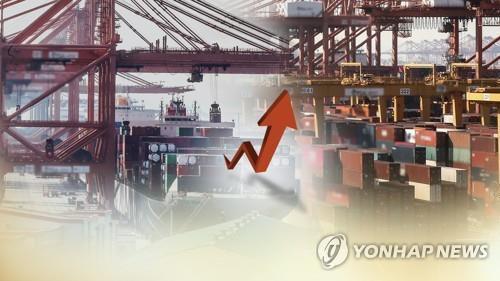 The strong first-half performance came amid a recovery in the global economy in spite of the prolonged coronavirus outbreak.

By product, exports of cosmetics goods soared 17.1 percent on-year to a half-year record of $2.71 billion in the six-month period, with those of coronavirus test kits and other medical goods shooting up 225 percent to $1.98 billion.

Exports to the United States swelled 15 percent on-year to $6.98 billion in the first half, with those to Germany spiking 165 percent to $1.87 billion.

Online exports came to $560 million in the first half, up 101 percent from a year earlier and accounting for 77 percent of last year's full-year amount.

Major destinations for online exports were Japan, China and the U.S. with key products, including cosmetics products and garments, according to the data.
(END)